Commentary and Guide to Practice 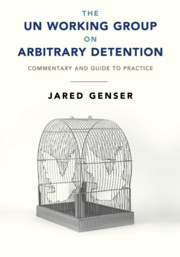 The United Nations Working Group on Arbitrary Detention is the first comprehensive review of the contributions of this important institution to understanding arbitrary detention today. The Working Group is a body of five independent human rights experts that considers individual complaints of arbitrary detention, adopting legal opinions as to whether a detention is compatible with states' obligations under international law. Since its establishment in 1991, it has adopted more than 1,200 case opinions and conducted more than fifty country missions. But much more than a jurisprudential review, these cases are presented in the book in the style of a treatise, where the widest array of issues on arbitrary detention are placed in the context of the requirements of multilateral treaties and other relevant international standards. Written for both practitioners and serious scholars alike, this book includes five case studies and a foreword by Archbishop Desmond M. Tutu.

'This meticulously researched volume is the first book to review the extensive jurisprudence and reporting of the UN Working Group on Arbitrary Detention since its creation in 1991. Authored by Jared Genser, one of the leading human rights lawyers in the world and someone who I had the pleasure of working with on many of his most challenging cases during my time as High Commissioner, the book is written to be highly accessible even for those without legal background. Importantly, Genser weaves into the narrative his experiences having successfully taken dozens of cases to the Working Group over his career, explaining how he has combined its opinions with focused political and public relations advocacy to secure the release of his clients from prison. This rare combination of serious scholarship with real world application is as powerful as it is inspiring, making this book a must read for anyone wanting to secure the release of political prisoners today.'

Mads Andenas Q.C. - Universitetet i Oslo and University of London, and former Member and Chair-Rapporteur, UN Working Group on Arbitrary Detention and Director, British Institute of International and Comparative Law

'The UN Working Group on Arbitrary Detention is a groundbreaking work of legal scholarship. The book is the first to describe and analyze the activities of this little-known but very important tribunal at the United Nations, which has the power to issue legal decisions that a person or group is being held in violation of international law. It is also a long overdue how to guide for lawyers, human rights defenders, and civil society activists about how to secure these important legal judgments … The book is more than an academic treatise because its author, Jared Genser, whose important work I have followed over the years, rests his analysis in his rich and proven experience as one of the most effective international human rights lawyers in the world at freeing political prisoners.'

'I’ve been arrested more than twenty times, repeatedly tortured, and have served more than three years in prison under various authoritarian rulers of The Maldives… After being convicted of manufactured terrorism charges, I hired this book’s author, Jared Genser, to serve as my pro bono counsel … In October 2015, [the Working Group] issued Opinion No. 33/2015, a scathing twenty-page judgment that rejected the Government’s arguments on every point and demanded my immediate release … I was greeted by my other counsel Amal Clooney and Jared when I arrived in London in January 2016 … In April 2019, I was elected to our Parliament, the People’s Majlis, and in May 2019, I was elected and sworn in to be its new Speaker … The greatest fear of any political prisoner is that they will be forgotten. This exceptional and meticulous work of scholarship will be an invaluable tool for advocates to make sure that doesn’t happen.'

The Honorable Mohamed Nasheed - Speaker of the People’s Majlis, The Maldives and formerPresident of The Maldives

'We have seen substantial progress reducing the phenomenon of arbitrary detention in the Americas but there still remains too many countries in our region with serious challenges to the rule of law and where especially repressive governments stubbornly persist in imprisoning their opponents against the tide of history. While the Inter-American Commission and Court of Human Rights have taken up many of these cases, the UN Working Group on Arbitrary Detention has also highlighted some of the worst. This impressive book, authored by Jared Genser, who over the years has represented prominent political prisoners in countries like Bolivia, Colombia, Cuba, Nicaragua, and Venezuela, shines an important spotlight on a major gap between the commitments of states in the American Convention on Human Rights to end the practice of arbitrary arrest and imprisonment and their implementation in practice.'

'Kudos to Jared Genser for bringing to life the inner workings and substantial accomplishments of one of the key UN human rights bodies - the Working Group on Arbitrary Detention … Genser not only presents an analysis of the legal significance of its jurisprudence over the past twenty-seven years, but then reveals to his reader what it really means to submit a case for a decision, to fight for the unjustly imprisoned, and to succeed in securing their freedom … It’s easy to criticize 'the UN' and its member states for its inconsistent defense of human right in its politicized forums; but the real achievements of the UN human rights system lie in the norms it has adopted and the independent mechanisms like the Working Group that fight independently to uphold these standards in real world situations, for real people. Genser opens our eyes to what’s needed to make a good case - and how to fight for individual freedom, successfully.'

'Having spent over a decade in solitary confinement as a political prisoner, I have come to appreciate with great intensity the subtle aspects of freedom - to read, to walk about and sleep - are actions that can easily be taken for granted … This is why, when a sympathetic prison guard whispered to me with hushed excitement 'the UN just called for your release!', I felt a renewed sense of hope … I learned that a short time later my international lawyer Jared Genser, the book’s author, had just made public Opinion No. 22/2015. The Working Group found I was being held in violation of international law and it urged my immediate release … the United Nations struck an irrecoverable blow to the former prime minister’s efforts to try to justify my detention … Jared Genser is a pioneer in the area of human rights law and a courageous and indefatigable representative of political prisoners around the world. This book represents his singular expertise in this area …'

'There are those for whom words have meaning and those who issue hollow promises. This is as true of people as it is of states … It is precisely to ensure that these words were not empty that France, with Robert Badinter and Louis Joinet, has played a leading role in the establishment of an original mechanism to ensure concretely the proper application of the intentions proclaimed by these nations … It is in this spirit that Jared Genser has produced this exceptional work, so rigorous in both legal and methodological terms. This book will surely become an indispensable tool for all those who believe that human rights are nothing if they are not concretely applied to individual situations … Thanks to the author for allowing us to better defend those persecuted around the world by so usefully assisting their advocates, without whom the universality of fundamental rights would be a vain hope.'

'As someone engaged in the defense of political prisoners over the years, I regard The United Nations Working Group on Arbitrary Detention as a tour de force and seminal scholarly work, which makes an enormous contribution to understanding the phenomenon of arbitrary detention in our world today. In particular, it is also a comprehensive and practical guide for freeing the arbitrarily detained, infused with the author’s experiences as an international lawyer in this complex, interdisciplinary, and specialist field, where his exceptional work is widely known and respected for its unique and effective contributions.'

'Up until the Working Group adopted Opinion No. 2/2003 on my case, I had been detained with total impunity and incommunicado by China for more than fourteen months. Within a day of this decision being made public, I was finally given access to my local lawyer and my hope was restored, learning the world had not forgotten my plight. Despite still having faced a potential death sentence on spurious charges of endangering national security, this invaluable opinion from the United Nations combined with the relentless advocacy of this book’s author Jared Genser resulted in my early release, enabling me to dedicate the balance of my life pursuing freedom, democracy, and human rights for the Chinese people.'

‘Genser (Georgetown Univ. Law Center) has broad legal experience, and he presents this important book as a 'practitioner's manual' of the UN Working Group on Arbitrary Detention. The author has amassed a remarkable amount of information about this little-known body.’

‘… Genser performs a great service for practitioners here in his close reading and enumeration of findings of the 2010 UN Joint Study on Global Practices in Relation to Secret Detention in the Context of Countering Terrorism - with its critically important discussion of those ‘circumstance (that) can elevate prolonged incommunicado detention into an act of torture or other mistreatment'.'