Home
The Roots of Revolt

The Roots of Revolt

A Political Economy of Egypt from Nasser to Mubarak 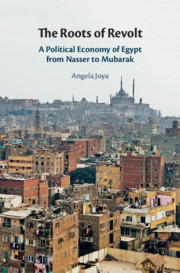 A conceptually rich, historically informed, and interdisciplinary study of the contentious politics emerging out of decades of authoritarian neoliberal economic reform, The Roots of Revolt examines the contested political economy of Egypt from Nasser to Mubarak, just prior to the Arab Uprisings of 2010–11. Based on extensive fieldwork conducted across rural and urban Egypt, Angela Joya employs an 'on the ground' approach to critical political economy that challenges the interpretations of Egyptian politics put forward by scholars of both democratization and authoritarianism. By critically reassessing the relationship between democracy and capitalist development, Joya demonstrates how renewed authoritarian politics were required to institutionalize neoliberal reforms demanded by the International Monetary Fund, presenting the real-world impact of economic policy on the lives of ordinary Egyptians before the Arab Uprisings.

'Deftly linking national, regional, and global dynamics, Joya provides a meticulous and informed account of neoliberal change in Egypt. Writing against a dominant narrative that ties market liberalisation to political freedoms, she convincingly details the emergence of neoliberal authoritarianism in Egypt and the rise of a new class fraction of capital. A powerful contribution to our understanding of Egypt's political economy that deserves to be widely read.'

'Joya meticulously documents the class struggles unleashed by more than two decades of neoliberal restructuring in Egypt, demonstrating the importance of a Marxist political economy framework not only for understanding the outbreak of the 25 January 2011 Revolution but also for the ongoing political and social conflicts in post-Mubarak Egypt.'

'In the 1980s and 1990s all the big books on the political economy of Egypt argued that market liberalization would lead to increased growth, better lives for most Egyptians, an end to the corruption that undergirded authoritarian rule, and a transition to democracy. They were wrong. In Roots of Revolt, the first big book on Egyptian political economy for the 2020s, Angela Joya explains why neoliberal reforms delivered none of the imagined benefits. Instead, liberalization entailed a process of capital accumulation by dispossession that impoverished urban and rural dwellers alike, while opening up a path for the military, which has ruled continuously since 1952, to become the most powerful and resourceful of today’s Egyptian capitalist class fractions.'

‘Overall, this book offers empirically rich content and evokes a broad-based discussion about the significant role the Egyptian state and IFIs have played in the process of facilitating capital accumulation by polarizing wealth distribution and access to economic resources. The book will be invaluable to those seeking to develop a deeper understanding of Egypt’s political and social conflicts that are exacerbated by the erosion of access to basic welfare services and the repressive and exclusionary experiences of the poor, the middle classes, and peasant and workers.’