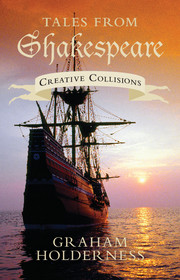 In this engaging new book, writer and critic Graham Holderness shows how a classic Shakespeare play can be the source for a modern story, providing a creative 'collision' between the Shakespeare text and contemporary concerns. Using an analogy from particle physics, Holderness tests his methodology through specific examples, structured in four parts: a recreation of performances of Hamlet and Richard II aboard the East India Company ship the Red Dragon in 1607; an imagined encounter between Shakespeare and Ben Jonson writing the King James Bible; the creation of a contemporary folk hero based on Coriolanus and drawing on films such as Skyfall and The Hurt Locker; and an account of the terrorist bombing at a performance of Twelfth Night in Qatar in 2005. These pieces of narrative and drama are interspersed with literary criticism, each using a feature of the original Shakespeare play or its performance to illuminate the extraordinary elasticity of Shakespeare. The 'tales' provoke questions about what we understand to be Shakespeare and not-Shakespeare, making the book of vital interest to students, scholars, and enthusiasts of Shakespeare, literary criticism and creative writing.

‘Graham Holderness, who was given Lamb's Tales from Shakespeare as a child, here returns the compliment by writing tales for grown ups - and again shows that he is one of the few academics who can combine scholarship with creativity, criticism with fantasy, historical awareness with commitment to present-day issues. Anyone who thought that there was nothing further to say about the authenticity of the account of shipboard performances of two Shakespeare plays off the coast of Sierra Leone in 1607, or the likelihood of Shakespeare and Ben Jonson collaborating on the King James Bible, will be surprised at what Holderness does with the two controversies.'

'One would have to be [a] hardened and humourless reader not to enjoy this engaging and interesting book.'

Andrew Hadfield Source: Around the Globe

'In his long and distinguished career, Holderness has been retelling Shakespeare, and in multiple forms: criticism, biography, fiction and poetry, and now, with this book, in a literary category of his own invention. He names it ‘creative criticism’, and his Tales from Shakespeare puts it into practice.'

'An invigorating reimagining of individual works and of the critical process itself, and a bold contribution to theoretical debates involving Shakespeare, the text and popular culture.'

'Successfully ‘colliding’ in this volume are the creative and critical dimensions. Both coexist and merge, illustrating Holderness’s main point: any activity linked to the name of Shakespeare - from the edition of texts to film adaptations, to advertisements and critical essays - exists in a continuum, and therefore must be studied as part of the system in order to understand the Shakespearean phenomenon.'