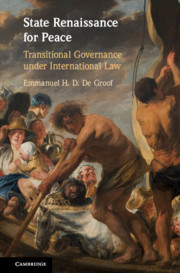 After 1989, the function of transitional governance changed. It became a process whereby transitional authorities introduce a constitutional transformation on the basis of interim laws. In spite of its domestic nature, it also became an international project and one with formidable ambitions: ending war, conflict or crisis by reconfiguring the state order. This model attracted international attention, from the UN Security Council and several regional organisations, and became a playing field of choice in international politics and diplomacy. Also without recourse to armed force, international actors could impact a state apparatus – through state renaissance. This book zooms in on the non-forcible aspects of conflict-related transitional governance while focusing on the transition itself. This study shows that neither transitional actors nor external actors must respect specific rules when realising or contributing to state renaissance. The legal limits to indirectly provoking regime change are also being unveiled.

'This is an important topic which has not received enough attention. The interim arrangements De Groof discusses are a key strategy for institutionalising transitions. De Groof’s work is an important contribution to mapping their core components through a detailed and broad comparative lens. The book deserves to be read by students, practitioners, and policy-makers, interested in transitions from conflict or social crisis. The repository of comparative material forms an important resource in itself.'

Christine Bell - Professor of Constitutional Law, The University of Edinburgh

'Traditionally institutional change within a State is seen as a matter for domestic constitutional law. De Groof’s groundbreaking study of recent practice, however, demonstrates that international law plays a role in regulating this process. Today international principles such as self-determination and non-intervention provide a normative framework for governance in the process of achieving a just peace.'

John Dugard - Emeritus Professor of Law, Universities of Leiden and the Witwatersrand

'In State Renaissance for Peace, Dr De Groof makes the useful argument that even if not directly governed by international law, situations of transitional governance within states are nonetheless embedded within international law, in particular via the principles of self-determination and non-intervention. Dr De Groof has written a timely and thought provoking study, illustrating that there is far more to international law than rules and compliance.'

'Transitional governance has played a crucial – if contested – role in societies grappling with a legacy of violent conﬂict and political instability, as well as other challenges. It poses difﬁcult questions at the interface of international law, political ethics, and public policy. This fascinating volume provides a unique contribution – as perhaps the first in-depth analysis of transitional governance from an international law perspective and it is also meticulously researched and presented.'

'Emmanuel De Groof has undertaken a systematic and meticulous study of ius in interregno: the international law pertaining to an existing state’s transition from one political order to another. He elucidates the existing and emerging norms that bridle both transitional governing arrangements and external involvement in transition processes. A must-read for scholars concerned with the intersection of international and domestic legal authority.'

'It appears at ﬁrst that De Groof’s intrastate focus on transitional governance would be of comparative constitutional nature. But the author analytically, and very convincingly, leads his reader through the international legal framework of ius in interregno. The book is interdisciplinary, yet firmly grounded in public international law. A very valuable contribution to international law and related fields.'