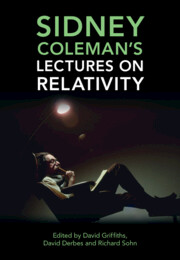 Sidney Coleman (1937–2007) earned his doctorate at Caltech under Murray Gell-Mann. Before completing his thesis, he was hired by Harvard and remained there his entire career. A celebrated particle theorist, he is perhaps best known for his brilliant lectures, given at Harvard and in a series of summer school courses at Erice, Sicily. Three times in the 1960s he taught a graduate course on Special and General Relativity; this book is based on lecture notes taken by three of his students and compiled by the Editors.

‘Sidney Coleman was one of the deepest thinkers and clearest teachers of modern physics. His Lectures on Relativity are a delight: brimming with insights, they invite us to survey Einstein’s greatest scientific legacy with a modern theorist’s toolkit.’

David Kaiser - Professor of Physics and the History of Science, Massachusetts Institute of Technology

‘One important lesson my esteemed mentor, Sidney Coleman, imparted to me was that if one were to claim that one understood something, one should mean it. Coleman is the undisputed master of clear understanding. Apparently, many theoretical physicists never got the memo. I hope that the reader of this, and other, Coleman books will eventually get the message by osmosis.’

A. Zee - Theoretical Physicist at University of California, Santa Barbara and the author of several books on physics, including Einstein Gravity in a Nutshell

‘It is a pleasure to read Sidney Coleman’s Lectures on Relativity, characterized as one would expect by exceptional clarity and insight. They are surprisingly modern, to boot, including discussions of black holes and cosmology. Any fan of relativity would benefit from reading them.’

‘In Sidney Coleman’s Lectures on Relativity, we get the benefit of Sidney’s questions. There are hundreds of question marks here, some leading the reader to the next topic and some highlighting confusing subtleties. It is not the Socratic method exactly because most of the questions are addressed to the smartest person in the room – Sidney himself. But his supremely logical answers lead the reader through this important subject.’