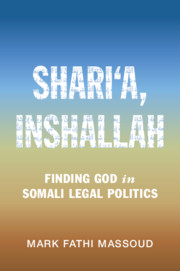 Western analysts have long denigrated Islamic states as antagonistic, even antithetical, to the rule of law. Mark Fathi Massoud tells a different story: for nearly 150 years, the Somali people have embraced shari'a, commonly translated as Islamic law, in the struggle for national identity and human rights. Lawyers, community leaders, and activists throughout the Horn of Africa have invoked God to oppose colonialism, resist dictators, expel warlords, and to fight for gender equality - all critical steps on the path to the rule of law. Shari'a, Inshallah traces the most dramatic moments of legal change, political collapse, and reconstruction in Somalia and Somaliland. Massoud upends the conventional account of secular legal progress and demonstrates instead how faith in a higher power guides people toward the rule of law.

'Shari‘a, Inshallah takes Massoud’s pathbreaking scholarship on fragile states to a new frontier … A brilliant, superbly nuanced analysis of the integral role of religion in state-building, law-making, and social life.'

'In Shari‘a Inshallah, Massoud examines Somalia’s political history through the lens of peacebuilding rather than state failure. The result is a bold and refreshing perspective on struggles over governance in Africa’s Horn that also offers an elegant reimagining of Islamic law’s role in the making of 21st century states.'

'A compassionate, timely, and hopeful study. The core message that ‘the problem is not shari‘a, it is what people have done with it’ presents an opportunity for Muslim-majority countries to reconcile faith, custom, and law.'

'A comprehensively researched and fascinating legal ethnography. Massoud shows how Somali activists acclaim, yet strategically manipulate, shari‘a to link nation, state, human rights, and inter-clan unity - perhaps even more so than the judicial institutions favored by the Western aid community.'

'Whatever you understand about shari‘a, this insightful book will challenge it. Massoud’s engaging narrative invites you to travel across places and times that deserve more attention. Your journey will end with new realizations about the rule of law, nation-building in Africa, and especially shari‘a.'