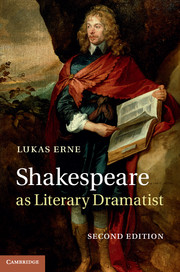 Now in a new edition, Lukas Erne's groundbreaking study argues that Shakespeare, apart from being a playwright who wrote theatrical texts for the stage, was also a literary dramatist who produced reading texts for the page. Examining the evidence from early published playbooks, Erne argues that Shakespeare wrote many of his plays with a readership in mind and that these 'literary' texts would have been abridged for the stage because they were too long for performance. The variant early texts of Romeo and Juliet, Henry V and Hamlet are shown to reveal important insights into the different media for which Shakespeare designed his plays. This revised and updated edition includes a new and substantial preface that reviews and intervenes in the controversy the study has triggered and lists reviews, articles and books which respond to or build on the first edition.

Review of the first edition:‘The year's best book on Shakespeare.'

Review of the first edition:‘An exceedingly learned book … I must say I found this mustered evidence and these arguments completely gripping.'

Review of the first edition:‘Among the most significant works of Shakespearean scholarship in recent years.'

Review of the first edition:‘Lukas Erne's new book is certainly one of the most fascinating, thought-provoking, and lucid studies of Shakespeare I can remember reading.'

Review of the first edition:‘Lukas Erne's brilliant new book … sets out probably the most exhilarating change in our image of Shakespeare as a writer for decades … Erne is brilliant at reconsidering evidence, taking a quizzical view of comments and facts that we had understood in one way for so long that we had forgotten to keep asking whether they could be read in other and better ways. It is the work of a scholar who here and in the years to come has a vast amount to teach us about Shakespeare, making him new, just as every performance makes the particular play new …'

Review of the first edition:‘The notion is familiar. Shakespeare - actor, playwright, man of the theatre - was a producer of scripts, devoted to their production in the playhouse, but indifferent to their appearance in print. Lukas Erne challenges this notion, with a persuasive picture of a Shakespeare conscious of having been read and reread, excerpted and anthologized; a writer writing with a readership in mind. Erne's book, which draws together the recent isolated conclusions of a number of scholars, builds on their foundations a more radical thesis, and makes it difficult to see how so many of us could have been taken in for so long by the unlikely image of a jobbing playwright.'

Review of the first edition:‘[Shakespeare as Literary Dramatist] will certainly change our future discourse about dramatic texts and about Shakespeare.'

Review of the first edition:‘[Shakespeare as Literary Dramatist] will serve to set new directions for Renaissance scholarship.'

Review of the first edition:‘An excellent and scrupulously researched book … this may well, then, be one of those rare books that changes how Shakespeare is perceived and edited.'

Review of the first edition:‘Erne achieves nothing less than the complete undoing of our understanding of Shakespeare as author.'

Review of the first edition:‘Erne's book is marvellously researched, meticulously annotated, sensitively illustrated, and delivered in clear, refulgent prose … its conclusions are so engaging that its arguments will become well known by a generation or more of Shakespeareans.'

'… address[es] an important question and establish[es] a probable answer.'

'This is an excellent book … to learn much of what is known about the quarto and Folio texts of the eighteen plays published in both formats, with special attention given to the shorter quartos. Erne presents his tremendous learning on this subject in a very understandable way.'