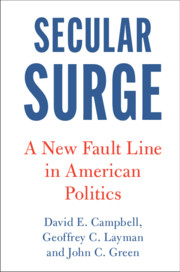 American society is rapidly secularizing–a radical departure from its historically high level of religiosity–and politics is a big part of the reason. Just as, forty years ago, the Religious Right arose as a new political movement, today secularism is gaining traction as a distinct and politically energized identity. This book examines the political causes and political consequences of this secular surge, drawing on a wealth of original data. The authors show that secular identity is in part a reaction to the Religious Right. However, while the political impact of secularism is profound, there may not yet be a Secular Left to counterbalance the Religious Right. Secularism has introduced new tensions within the Democratic Party while adding oxygen to political polarization between Democrats and Republicans. Still there may be opportunities to reach common ground if politicians seek to forge coalitions that encompass both secular and religious Americans.

‘A thoughtful, provocative book about one of the most important - and underappreciated - phenomena in American politics today.’

‘Secular Surge captures the single most important development in contemporary American politics: the ascendance of the non-believer. For growing numbers of voters, religion is simply irrelevant, and they are finding a home in the Democratic Party. Just as the rise of the Christian right transformed the Republican Party, the Secular Left is driving an internal realignment of the Democrats. David E. Campbell, Geoffrey C. Layman and John C. Green are the ideal choice to tell this story.’

‘Despite the increasing number of non-religious people in the United States, scholars’ understanding of this group is woefully limited. Secular Surge draws on an extraordinary range of data to make compelling arguments about who secular Americans are, why secularism is on the rise, and what the political consequences of an increasingly secular America are. This pathbreaking book is required reading for anyone interested in religion or politics, both separately and together.’

‘In just one generation, we have witnessed a dramatic transformation in the U.S. religious landscape: more and more Americans are opting out of organized religion altogether. Why is this the case? What social and political ramifications might arise from the growth in religious disaffiliation? In this pathbreaking book, David Campbell, Geoffrey Layman, and John Green offer systematic, detailed answers to these questions. Their work will form the foundation of our understanding of American secularists for many years to come.’

‘The rise of the religiously unaffiliated is one of the most important phenomena in both American religion and American politics. This book tells you who these people are, what they believe, and what an increasingly secular United States might look like. It is a deeply researched and pathbreaking work.’

‘The number of non-religious people in the United States is rapidly rising. How is this growing presence of secular Americans playing out in our national politics? In this highly readable, extremely informative, and very timely analysis, Campbell, Layman, and Green offer a rigorous and insightful discussion of the politics of secularism in America. Strongly, heartily recommended.’

‘… a sober, wide-ranging, and often witty analysis that goes much deeper than conventional polling and its byproducts.’

‘… presents important new evidence in support of the Backlash Hypothesis.’