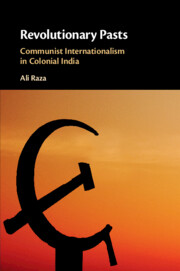 In this engaging and innovative history of the communist movement in colonial India, Ali Raza reveals the lives, geographies, and anti-colonial struggles of Indian revolutionaries and how they sought to remake the world. Driven by the utopian visions of Communist Internationalism, Indian revolutionaries yearned and struggled for a global upheaval that would overthrow European imperialisms and radically transform India and the world. In an age marked by political upheavals, intellectual ferment, collapsing empires, and global conflicts, Indian revolutionaries stood alongside countless others in the colonized world and beyond in their desire to usher in a future liberated from colonialism and capitalism. Drawing from a wealth of archival materials, Raza demonstrates how Communist Internationalism was a crucial project in the struggle for national liberation and inaugurates a new approach to the global history of communism and decolonization.

‘Written with great flair, and refreshingly nonpartisan, Revolutionary Pasts will shift the paradigms of studying the Left in South Asia. Ali Raza embraces and acknowledges the complexity and dissonance he encounters in his archive, unpacking its agendas and offering them up to the reader with astute analysis, restoring race to histories of leftist activism.’

‘Ali Raza captures the utopian imaginaries and the global itineraries that shaped Indian Communism, and brought Marx to the subcontinent in this beautifully written, meticulously researched book. His is a signal contribution to global intellectual history and to studies of Left thought and praxis.’

‘… a valuable contribution to the subject.’

‘This epic tale of revolutionary internationalism at one and the same time illuminates the class, cultural and political dynamics of Indian society alongside the exigencies of colonial statecraft in the final decades under the Raj.’

‘Revolutionary Pasts provides a deeply moving account of, and an important historical argument about, communism in India. Its insights resonate urgently with the present when, in India, every dissident is locked up on the grounds of being a dangerous communist - an “urban Naxal,” a “Maoist.” Without nostalgia, Revolutionary Pasts recovers radical lineages that are crucial for the future.’