Authorship from Manuscript to Print 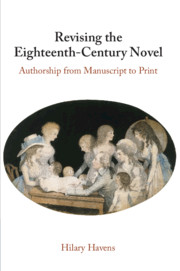 Revisions form a natural part of the writing process, but is the concept of revision actually an intrinsic part of the formation of the novel genre? Through the recovery and analysis of material from novel manuscripts and post-publication revisions, Hilary Havens identifies a form of 'networked authorship'. By tracing authors' revisions to their novels, the influence of familial and literary circles, reviewers, and authors' own previous writings can be discerned. Havens focuses on the work of Samuel Richardson, Frances Burney, Jane Austen, and Maria Edgeworth to challenge the individualistic view of authorship that arose during the Romantic period, and argues that networked authorship shaped the composition of eighteenth-century novels. Exploring these themes of collaboration and social networks, as well as engaging with the burgeoning trend towards textual recovery, this work is an important contribution in the study of eighteenth-century novels and their manuscript counterparts.

‘… Revising the Eighteenth-Century Novel persuasively delivers on its premises and also recommends a novel tool that scholars will likely find valuable in their reconstruction of physically impaired manuscripts.’

‘This study's careful attention to a massive archive makes it a valuable piece of scholarship … Richardson, Burney, Austen, and Edgeworth were each prolific writers and Havens' thorough coverage of all four is a service to the field … [and] because of its accessible focus on themes of gendered (dis)empowerment in the lives and works of its canonical figures, I can pay this study the tribute, rarer than it should be, of saying that I expect to recommend it to undergraduates …’

‘Hilary Havens’s Revising the Eighteenth-Century Novel: Authorship from Manuscript to Print is another important intervention in the history of both the novel and ideas of authorship … Havens has recovered previously hidden evidence about revision using digital palaeography - a powerful and fruitful new technology.’

‘Revising the Eighteenth-Century Novel is a valuable contribution to our understanding of how the genre emerged and how authors crafted their texts in a social world over time … The real impact of Revising the Eighteenth-Century Novel is its central argument: that novels were the creation of many people and many influences, that even in their printed form they should not be considered textually stable or 'final,' and that all literary scholars need to be more aware of the influences that created the text that they are reading and more open to the idea that those influences may have contradicted the initial intent of the author.’

‘With careful structuring, and a mostly lucid style, this industrious book claims new insights into the 'networks' that, via Bruno Latour, are already well established as significant in this field.’

‘… this is essentially an interpretative, critical book … This is a rewarding study, one to argue with and learn from.’