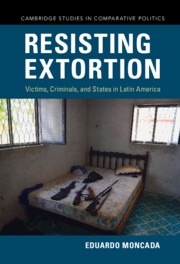 Criminal extortion is an understudied, but widespread and severe problem in Latin America. In states that cannot or choose not to uphold the rule of law, victims are often seen as helpless in the face of powerful criminals. However, even under such difficult circumstances, victims resist criminal extortion in surprisingly different ways. Drawing on extensive fieldwork in violent localities in Colombia, El Salvador and Mexico, Moncada weaves together interviews, focus groups, and participatory drawing exercises to explain why victims pursue distinct strategies to resist criminal extortion. The analysis traces and compares processes that lead to individual acts of everyday resistance; sporadic killings by ad hoc groups of victims and police; institutionalized and sustained collective vigilantism; and coordination between victims and states to co-produce order in ways that both strengthen and undermine the rule of law. This book offers valuable new insights into the broader politics of crime and the state.

'Resisting Extortion offers an empirically rich analysis of how everyday citizens in Latin America seek to reduce the burdens of crime on their lives through different forms of resistance. Drawing on fascinating case studies in Mexico, El Salvador, and Colombia this book offers important comparative insights into how Latin Americans confront crime amid state inefficacy and corruption. This work opens theoretical pathways and will provide important new avenues of thinking to students and scholars of Latin America as well as policymakers seeking to address some of the greatest challenges affecting the region.'

'This is a powerful combination of outstanding theorizing, elegant style, and courage. Eduardo Moncada takes us to a different level in understanding why, when and how civilians use varying strategies civilians to respond to criminal extortion. The ideas in this book are novel and exciting and will change the way we think about civilian responses to criminal groups. Only very few authors can conduct such courageous and extensive ethnographic work in so many countries – Mexico, El Salvador, and Colombia – and translate the findings with erudition, incisive theorizing and analytic rigor. The book is a must read for anyone interested in conflict, public insecurity, criminal rule, collective action, resistance, the surge of violence in Latin America and how these have deeply transformed politics in the region and everyday life for so many people.'

'The scourge of crime and violence afflicts much of Latin America. Yet, victims are not passive. How and why do the responses of victimized communities vary? Through revealing comparative analysis and intensive fieldwork Moncada finds answers in the local context and political economy. This is a major contribution not only to the study of coercion and collective action, but also to the broader analysis of Latin America’s distinctive political economy.'

'This is a powerful, agenda-setting book about societal resistance to criminal extortion in Latin America. Based on impressive multi-method and multi-sited fieldwork, Moncada masterfully identifies and explains different paths of resistance, including everyday forms of resistance, vigilantism, and/or coproduction of order. Victims of extortion respond strategically to subnational conditions, particularly variations in criminal’s time horizons; local political economies and corresponding level of collective action; and criminal capture of the police. Resisting Extortion is a pathbreaking book not only because of its theoretical apparatus and rich conceptual innovation but also because of its highly original fieldwork and deep ethnographic sensibility.'