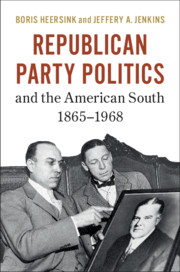 ‘How did Lincoln's Republican Party transform into today's modern party of white, conservative America? Heersink and Jenkins dig deep into the under-tilled politics of the post-Civil War Southern Republican Party, rewarding us with a robust and fascinating account of the South's partisan evolution. With impressive historical sweep and carefully crafted case studies, Republican Party Politics and the American South makes an essential contribution to our understanding of America's political development.'

‘If a political party is repressed, what happens to its organization on the ground?  How does its organizational and factional politics during its ‘invisible' years shape resurgence? In this definitive account of the Southern Republican party, Heersink and Jenkins pose these questions and provide continually surprising answers. Every scholar of American parties and of the South's constitutive role in American history should read this utterly fascinating study.'

‘Deeply researched, this riveting book reveals the ill-understood, complex, and conflictual story of the Republican Party in the South, from the close of the Civil War to the late 1960s. This rich analytical history illuminates many dimensions of intra-party and partisan politics, including matters of race and class, deepening our understanding of profound questions about motivations and preferences, strategies and impact.'

‘If students of American political parties think of the history of the Republican Party at all, they focus on two bookends - its Reconstruction founding, with a core constituency of newly enfranchised Blacks, and its more recent manifestation, with a core constituency of conservative whites. Heersink and Jenkins show that the abandonment of southern Black voters was abetted by national party building strategies. The evidence brought to bear is a deft combination of quantitative analysis of the inclusion of Black delegates in national party conventions and insightful case studies of party development within each state of the former Confederacy.'

‘Prof. Boris Heersink and Jeffrey A. Jenkins outstanding work Republican Party Politics and the American South 1865–1968 explores the transformation of the Party of Lincoln into the predominant modern, white conservative political institution. The careful use of case studies of the American South from the end of the Civil War, through the simultaneous repression of the black vote, local organization, and black inclusion in state and national GOP party politics shed light on the politics of the GOP’s ‘phone booth party’ years. They carry us through to the fragmentation of the South in the 1968 election and the resurgence of the GOP as viable alternative to the Democrats. The work is a major contribution to understanding American political development and will need to sit on the desk in close reach of all of us who study Southern and American politics.’

‘… Heersink and Jenkins's study is incredibly important. It will help those wishing to understand how and why the Party of Lincoln became the Party of Trump.'