Home
The Persistence of Party

The Persistence of Party 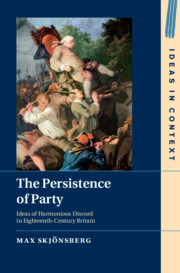 Political parties are taken for granted today, but how was the idea of party viewed in the eighteenth century, when core components of modern, representative politics were trialled? From Bolingbroke to Burke, political thinkers regarded party as a fundamental concept of politics, especially in the parliamentary system of Great Britain. The paradox of party was best formulated by David Hume: while parties often threatened the total dissolution of the government, they were also the source of life and vigour in modern politics. In the eighteenth century, party was usually understood as a set of flexible and evolving principles, associated with names and traditions, which categorised and managed political actors, voters, and commentators. Max Skjönsberg thus demonstrates that the idea of party as ideological unity is not purely a nineteenth- or twentieth-century phenomenon but can be traced to the eighteenth century.

‘The Persistence of Party is an original book. Skjönsberg offers a rich intellectual history revolving around the discussion of party politics in eighteenth-century Britain.’

‘The reader of his book learns not only much about neglected figures in the history of the theory of party politics, like Rapin, Brown, and several others whom I have not been able to discuss here, but also much about the ever-changing nature of party politics in Britain during this period, from the start of Whig hegemony in 1714 to the cleavage of the Whig party into Foxites and Pittites in the 1790s. The theoretical point, ... is that the study of the history of political thought sometimes needs to be at the same time study of the details of real-world political practice.’

‘Max Skjönsberg traces the 18th-century dialogue about this 'enduring and crucial part of British politics' in his outstanding new book, The Persistence of Party.’

‘In The Persistence of Party, Max Skjönsberg proves himself an outstanding guide through this fruitful but complex period … Any student of constitutionalism will benefit from this thorough treatment of a rich period of political history.’

‘Skjönsberg’s study … helps us remain alert tothe dangers that lurk if we fail tofind ways to channel party so as to lower, rather thanraise, the temperature. Skjönsberg’s title is thus well chosen. Whilst he does notpretend that the eighteenth century will somehow magic up answers for the twenty-first,he rightly encourages us to take on board a key lesson of the eighteenth century: that party will persist.’

‘At the book’s core are rich discussions of printed and archival primary sources … Recommended.’