The Transformation of International Politics, 1860–1933 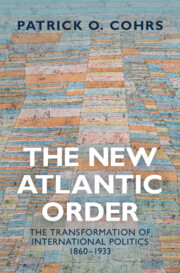 This magisterial new history elucidates a momentous transformation process that changed the world: the struggle to create, for the first time, a modern Atlantic order in the long twentieth century (1860–2020). Placing it in a broader historical and global context, Patrick O. Cohrs reinterprets the Paris Peace Conference of 1919 as the original attempt to supersede the Eurocentric 'world order' of the age of imperialism and found a more legitimate peace system – a system that could not yet be global but had to be essentially transatlantic. Yet he also sheds new light on why, despite remarkable learning-processes, it proved impossible to forge a durable Atlantic peace after a First World War that became the long twentieth century's cathartic catastrophe. In a broader perspective this ground-breaking study shows what a decisive impact this epochal struggle has had not only for modern conceptions of peace, collective security and an integrative, rule-based international order but also for formative ideas of self-determination, liberal-democratic government and the West.

'In this opus magnum Patrick Cohrs presents an original and thought-provoking re-appraisal of the transformation of world politics between the era of global imperialism and the aftermath of the First World War. This is a compelling book that should be of interest to anyone who wants to understand how challenging it was to create a stable international order after the 20th century's crucial cataclysm, how the key actors struggled to build a durable peace, and how the consequences of what they thought and did still shape the world of the 21st century.'

Paul W. Schroeder - author of The Transformation of European Politics, 1763–1848

'This ground-breaking work offers a challenging and original interpretation of how and why the international order was transformed at the dawn of a "long" twentieth century. What drove these changes was a struggle, involving an unprecedented number of transnational actors and ideas, to forge rules, norms and institutions of a new Atlantic order among democratic states. The system-building efforts of the post-World War I era were to resonate throughout the entire century.'

Jürgen Osterhammel - author of The Transformation of the World

'An important book that recasts debates about European and global disorder after the First World War in a longer history of Atlantic world-order making since 1860. Advancing the case that the Paris Peace Conference produced an international ‘system' that sought to address the question of German power and its place in the world, this new history also offers insights for contemporary debates on the question of China and the prospects for regional and global order in the present disorderly context of the 21st Century.'

Patricia Clavin - author of Securing the World Economy: The Reinvention of the League of Nations, 1920–1946

'Patrick Cohrs's new grand narrative reappraises great-power relations from the late nineteenth century across World War I and the postwar treaties to argue that durably bringing peace to Europe would ultimately require an “Atlantic” system that both reconciled Germany and durably engaged the United States. The reader will find a major reassessment of the peace that might have been and a challenging diagnosis of what sadly prevented it.'

Charles S. Maier - author of Among Empires - American Ascendancy and Its Predecessors

'This is a work of international history par excellence. Patrick Cohrs ambitiously merges an in-depth analysis of international politics with structuralist methods to capture the transformation of global order between 1860 and 1933. The New Atlantic Order offers a convincing structuralist approach to the coming of the Great War, showing that European leaders certainly did not sleepwalk into the abyss. The book's reappraisal of 1914–1918 diplomacy and the Paris Peace Conference, which draws on a massive array of new archival sources, is particularly strong, indeed admirable. Here is an international historian bringing the fruits of his work.'

Paul M. Kennedy - author of The Rise and Fall of the Great Powers

'… its sweeping synthesis and grounding in primary sources makes an impressive thousand-page read.'