Home
Money and the Rule of Law

Money and the Rule of Law

Generality and Predictability in Monetary Institutions 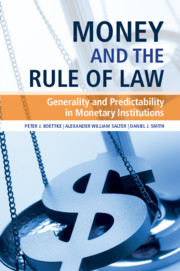 Contemporary monetary institutions are flawed at a foundational level. The reigning paradigm in monetary policy holds up constrained discretion as the preferred operating framework for central banks. But no matter how smart or well-intentioned are central bankers, discretionary policy contains information and incentive problems that make macroeconomic stability systematically unlikely. Furthermore, central bank discretion implicitly violates the basic jurisprudential norms of liberal democracy. Drawing on a wide body of scholarship, this volume presents a novel argument in favor of embedding monetary institutions into a rule of law framework. The authors argue for general, predictable rules to provide a sturdier foundation for economic growth and prosperity. A rule of law approach to monetary policy would remedy the flaws that resulted in misguided monetary responses to the 2007-8 financial crisis and the COVID-19 pandemic. Understanding the case for true monetary rules is the first step toward creating more stable monetary institutions.

'A profound and highly original assessment of monetary policy and its inseparable connection to the rule of law, a key principal of economic freedom. This is a great read, carefully researched with telling quotes from top policy makers. It dissects tough monetary problems into easy-to-understand pieces – objectives, instruments, targets, and models. It candidly describes political pressures on the Fed with hard evidence from past to present. It creatively uses the great ideas of Hayek, Friedman, and Buchanan to confront the weaker scholarship of today. Most ominously, it warns that Fed is once again expanding its reach and thereby threatening the rule of law.'

'Like Hayek, Friedman, and Buchanan before them, Boettke, Salter, and Smith argue convincingly for fundamental changes in institutional design that, by enforcing rules over discretion in monetary policymaking, will help restore economic prosperity and the smooth functioning of our liberal democratic system. Anyone with a serious interest in using economics to improve the lives of all Americans should read this book.'

‘This book … couldn't have arrived at a better time … important for all readers hoping to preserve good governance, promote shared prosperity, and limit expropriation by those who would exploit democratic institutions.’

'This book is required reading for anyone concerned about monetary policymakers’ management of the COVID 19 economic crisis and, especially, their lack of attention to the long-term impacts of their historically dramatic monetary policy changes.'

William F. Ford - President of the Federal Reserve Bank of Atlanta from 1980–83

‘The authors provide a very much needed road map for returning to a disciplined monetary system for the remainder of the 21st century.’

‘Many economists rightly advocate the rule of law, and allocation by markets rather than by expert central planners, as the key to economic development. Too few apply these principles to monetary institutions. Boettke, Smith, and Salter offer an insightful alternative. They diagnose the serious problems with the management of our money by central bankers who exercise discretion unconstrained by the rule of law. And they point the way toward much better arrangements. Highly recommended.’

‘A well-researched, well-written, highly-readable gem. By weaving the technical, philosophical, institutional, historical, and empirical aspects of money tightly together with the thread of economic principles, they are able to present money in a new light - the light of the rule of law. With that, the authors masterfully show why virtually every idea in vogue today has been tried before and why each has failed time and time again.’