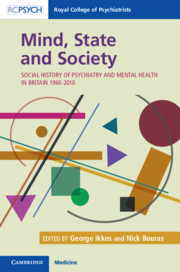 Mind, State and Society
Social History of Psychiatry and Mental Health in Britain 1960–2010
Buy print or eBook[Opens in a new window]

There remains a gap between needs, aspirations and delivery in psychiatry and mental health. To close this gap there is a need to attend more intensely to social science and mad studies, as well as neuroscience, in professional formation in psychiatry and mental health. Further strengthening of the nursing profession and greater engagement of action therapies will also help close the gap in practice. To be effective, such efforts must be underpinned by a commitment to pluralism.

‘Today … it is part of morality not to be at home in one’s home.’

Referring to work by his friend and close collaborator the early twentieth-century cultural critic Walter Benjamin, the musicologist, sociologist and philosopher Theodor W. Adorno wrote that it ‘settled at the cross-roads of magic and positivism. That place is bewitched.’2 The same might be said about contemporary psychiatry. This is an observation not a reprimand, not least because of the need to maintain hope even in the face of seemingly hopeless clinical situations where the stakes are remarkably high indeed. Arguably, this is where psychiatry should be with its laudable commitment to science confronting the indeterminacy of human action. The fact that the membership of the Spirituality Special Interest Group (SIG) of the Royal College of Psychiatrists (RCPsych) is only third to that of the Philosophy and Transcultural SIG, signals the same challenge. Perhaps ‘bewitched’ is too strong a word but sometimes it feels right given the heated controversies that often surround mental health.

Messianic fantasies are usually tempered with age, but one would expect to find their spark in youth. At the beginning of our half-century 1960–2010 both society and psychiatry were young. They were young in the sense that baby boomers tilted demography towards youth; the demand for rigorous application of the scientific method in psychiatry was also young; and the loud clamour for deinstitutionalisation and community care had just began.

Throughout psychiatry, grand solutions have been conceived, ideologies trumpeted, policies formed and laws enacted. Some key examples are asylums as therapeutic institutions; the magic bullets of biological psychiatry; deinstitutionalisation and care in the community; and normalisation and recovery. Each has made positive contributions yet, by their own assessments, their efforts have been only partially redeemed. The big psychiatric hospitals have mostly closed but that now is ‘better’ is expressed with various degrees of uncertainty, if at all, by contributors to this volume. It could and should have been better.

‘Culture Is the Subject’s Nature’

Since the ‘decade of the brain’, enormous strides have been made in neuroscience.3 It has illuminated the exquisite complexity and plasticity of our neurobiology but this enlightenment has not been translated into advances in treatments to the same extent as in other medical specialties. The RCPsych secured funds from the Wellcome Trust and the Gatsby Foundation in 2018 to create a Neuroscience Board. Its purpose is to focus ‘on the exciting advances in basic and clinical neuroscience, so that trainees are better equipped to provide mental health care in the future’. This is necessary and welcome. Psychiatrists together with psychologists are the custodians of the clinical understanding and application of neuroscience in mental health and illness, though not exclusively so.

Paradoxically, while illuminating the nature of the psychophysiological mechanisms that mediate them, neuroscience has foregrounded the importance of psychological and social processes in mental health and illness.4 Unless this is taken fully on board, twenty-first-century neuroscience in psychiatry risks remaining therapeutically elusive, as it has been since the 1990s, the ‘decade of the brain’. In 2015, Thomas Insel reached a bleak verdict on his thirteen-year term as director of the US National Institute of Mental Health where he invested $20 billion into research on biological psychiatry: ‘I don’t think we moved the needle in reducing suicide, reducing hospitalizations, improving recovery for the tens of millions of people who have mental illness.’5 This may or may not change. If it does change, the question is by how much and how soon?

Affect, not the brain, is the primary object of the clinical medical expertise of psychiatrists.6 Our contributors show unambiguously that social changes have had an overwhelmingly greater impact on psychiatry and mental health services than biomedical research. We consider it likely that social changes will continue to outpace neuroscience advances in terms of the impact on the prevalence of disorders and clinical practice. As this book goes to print, the world has experienced a global pandemic from Covid-19, with enormous and uncertain long-term social effects, though we would argue that, with the enhanced role of IT and telemedicine, we have already moved further away from community and towards meta-community psychiatry and mental health.7 Consequently, we concur with those advocating enhanced training in the social sciences and greater integration with public health for psychiatrists.8

The importance of the history of psychiatry in psychiatric training has also recently been advocated.9 There is a strong case for the RCPsych to establish a Social Sciences and History of Psychiatry Board to perform a similar function to the Neuroscience Board in updating and safeguarding the curriculum for the future. This should include leading representatives from these other disciplines as well as Mad Studies. The aim would be to provide robust foundations and the ability to keep up with evolving literature for our professionals, in a manner analogous to neuroscience. Similarly, we need a continually developing responsiveness to service users and carers. Most psychiatrists cannot be at the cutting edge of basic research in either the social sciences or the neurosciences. Yet they should be able to keep up with major developments in the literature and translate in a mature and timely fashion what is relevant into their practice.

The importance of public mental health is increasingly understood.10 The profession will do well to engage more actively in the public sphere and be expected, trained and funded to do so. Moves in this direction should go beyond epidemiology and health services management to engage deeply with social theory and subjectivity.11 This requires engaging with anthropology too, with its outstanding record of ‘thick description’ of peoples and cultures and fine conceptual analysis and investigation of personal meaning, including in severe mental illness.12 This has implications for medical schools and psychiatric training schemes in terms of the qualities they seek in their recruits.

When it comes to NHS policy, we suggest building further on the remarkable changes in mental health nursing. As a profession, it is naturally poised to maintain the right balance in making the ‘biopsychosocial’ model a tangible reality, especially for those with more severe impairments and disabilities. It has no need to privilege ‘bio’ or ‘psycho’ or ‘social’. Skills in the whole range should be supported, continuous professional development strengthened and clinical quality actively facilitated and judiciously assured. The proposal does not intend the marginalisation of other mental health professions such as psychiatry and psychology. On the contrary, we believe it will help them fulfil their mission in terms of cultivating their special strengths. Pluralist understanding and multidisciplinary services are essential. None of the professions will succeed, however, unless there is full service-user and carer engagement, adequate provision of resources and effective recruitment and retention strategies. At present, these lag unacceptably behind.

Industrial therapy (and work) aside, the shadowy presence, even absence, of action-oriented therapies in this volume reflects a significant historical gap in mental health services development. Occupational therapy is the most obvious but others such as art, drama, dance and the like are also relevant. Such neglect flies in the face of our increasing understanding of central nervous system (CNS) plasticity and the importance of meaningful personal enterprise and practical action in both health and disease.

Foes and friends and even practitioners sometimes caricature psychiatry as a towering monolith. However, psychiatry is what psychiatrists do; patients, carers and colleagues experience; and the broader community understands, expects and funds. We believe that Mind State and Society: Social History of Psychiatry and Mental Health in Britain 1960–2010 demonstrates that what Wittgenstein wrote about language applies to some extent to psychiatry too: ‘[it] can be seen as an ancient city: a maze of little streets and squares, of old and new houses, and of houses with additions from various periods; and this surrounded by a multitude of new boroughs with straight regular streets and uniform houses.’13 In our city (polis), some find a home, others refuge and care, and still others experience neglect, oppression or abuse. In writing its history, chapter authors have also contributed to psychiatry’s philosophy: ontology and ethics; resources for humility, professionalism and citizenship (politics).