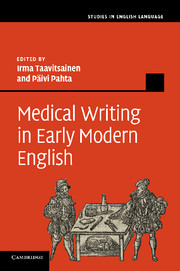 Medical writing tells us a great deal about how the language of science has developed in constructing and communicating knowledge in English. This volume provides a new perspective on the evolution of the special language of medicine, based on the electronic corpus of Early Modern English Medical Texts, containing over two million words of medical writing from 1500 to 1700. The book presents results from large-scale empirical research on the new materials and provides a more detailed and diversified picture of domain-specific developments than any previous book. Three introductory chapters provide the sociohistorical, disciplinary and textual frame for nine empirical studies, which address a range of key issues in a wide variety of medical genres from fresh angles. The book is useful for researchers and students within several fields, including the development of special languages, genre and register analysis, (historical) corpus linguistics, historical pragmatics, and medical and cultural history.

'This volume casts new light on the evolution of English as the language of medicine, with data originating from the two-million word corpus of Early Modern English Medical Texts (EMEMT) for the period 1500–1700.'

'… valuable conclusions about medical culture … four appendices of raw data, stance markers, and a list of texts in the corpus; a very useful bibliography of primary and secondary sources follows.'

Source: Journal of the History of Medicine and Allied Sciences

'This is a well-formed piece of research and opens up new avenues for the intratextual analysis of medical recipes.'