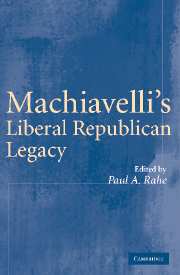 The significance of Machiavelli's political thinking for the development of modern republicanism is a matter of great controversy. In this volume, a distinguished team of political theorists and historians reassess the evidence, examining the character of Machiavelli's own republicanism and charting his influence on Marchamont Nedham, James Harrington, John Locke, Algernon Sidney, John Trenchard, Thomas Gordon, David Hume, the Baron de Montesquieu, Benjamin Franklin, George Washington, John Adams, Thomas Jefferson, James Madison, and Alexander Hamilton. This work argues that while Machiavelli himself was not liberal, he did set the stage for the emergence of liberal republicanism in England. By the exponents of commercial society he provided the foundations for a moderation of commonwealth ideology and exercised considerable, if circumscribed, influence on the statesmen who founded the American Republic. Machiavelli's Liberal Republican Legacy will be of great interest to political theorists, early modern historians, and students of the American political tradition.

"This outstanding collection of essays examines the very important question of how Machiavelli's work influenced modern political thought and practice. Its excellent contributors consider a wide variety of issues in their several ways, making a powerful contribution to our understanding of the subject."
Donald Kagan, Yale University

"This important volume is the best and most accessible source for the 'Straussian' perspective on Machiavelli's influence over modern political thought. It suggests how Machiavelli's 'lowering' of classical moral-political standards (by supplanting the good, moderation and justice with necessity, appetite, and domination) was absorbed and transmitted during the English Commonwealth, Scottish Enlightenment and American Founding. Since the volume heralds Machiavelli's decisive break with Aristotelian and Ciceronian republicanism, it will assume a prominent place alongside Machiavelli and Republicanism (Cambridge, 1990), which posited the opposite, 'Cambridge School,' view of Machiavelli as a faithful conduit of civic republicanism into modernity. While the real Machiavelli very likely corresponds with neither of these two diametrically opposed interpretations, Machiavelli's Liberal Republican Legacy is undoubtedly a major statement in this vibrant debate."
John P. McCormick, University of Chicago

"This deeply thought-provoking collection of original essays constitutes a major enrichment of our understanding of the sources and grounding of liberal republicanism. Machiavelli's subtle, complex, and manifold influence on our civic tradition has never before been explored in such range and depth."
Thomas L. Pangle, University of Texas, Austin

"This book is destined to takes its place among a small but distinguished shelf of works dealing with the role of Machiavelli in fashioning the world of Anglo-American republicanism. As such, it will garner readers for years to come. It will be of special interest to those wishing to understand the true, as opposed to the alleged, influence of Machiavelli on the generation of the American founders."
Steven B. Smith, Yale University

"Rahe and his collaborators attempt to supply a reading of the Machiavellian 'legacy' or tradition different from the one pioneered by J.G.A. Pocock some decades ago. They start from a different understanding of Machiavelli , explained subtly and intelligently in a lead-off essay by Markus Fischer, and end up seeing the Machiavellian tradition in richer and more modernist terms than Pocock did. Among other things, they avoid Pocock's untenable distinction between an antique Machiavellian republicanism and a modernist liberalism, a dichotomy which their treatment of Machiavelli's successors renders quite incredible. The volume, moreover, manages to combine the strengths of a single-authored book with those of a collection. The authors of the individual essays are expert in their subject, yet the collection as a whole has much of the unity of theme and manner of treatment one might expect in a single-authored book. Many of the individual essays are gems and the whole works as a book."
Michael Zuckert, University of Notre Dame

“I would strongly recommend this volume to all scholars who are interested in Machiavelli’s influence on the evolution of that peculiar species of liberal republicanism that continues to survive and thrive in the United States.”
Perspectives on Politics, John Langton, Westminster College

"The authors provide a valuable synopsis of some major, as well as some lesser-known, political thinkers in the Anglo-American tradition. I recommend this book to all those with an interest in the history of Anglo-American political thought, as well as those looking to transcend the standard liberal republican dichotomies in contemporary interpretations of the American founding."
Canadian Journal of History