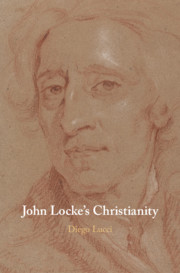 John Locke's religious interests and concerns permeate his philosophical production and are best expressed in his later writings on religion, which represent the culmination of his studies. In this volume, Diego Lucci offers a thorough analysis and reassessment of Locke's unique, heterodox, internally coherent version of Protestant Christianity, which emerges from The Reasonableness of Christianity and other public as well as private texts. In order to clarify Locke's views on morality, salvation, and the afterlife, Lucci critically examines Locke's theistic ethics, biblical hermeneutics, reflection on natural and revealed law, mortalism, theory of personal identity, Christology, and tolerationism. While emphasizing the originality of Locke's scripture-based religion, this book calls attention to his influences and explores the reception of his unorthodox theological ideas. Moreover, the book highlights the impact of Locke's natural and biblical theology on other areas of his thought, thus enabling a better understanding of the unity of his work.

'Lucci’s book is the most up-to-date and comprehensive treatment of Locke’s religious thought and writings. It is a masterly account that in many ways has mastered Locke.'

'Many books have asserted the importance for Locke of his Christian convictions. Now at last we have a comprehensive and authoritative reconstruction of Locke’s theology. Embedded as deeply in the archive as in Locke’s published works, Diego Lucci’s book is a model of exposition and interpretation.'

'After reading this book, one would no longer think of John Locke merely as a precursor of secular political theory or Enlightenment epistemology. Diego Lucci has convincingly demonstrated how Locke needs to be situated within the context of early modern English and European philosophical and theological debates surrounding the human self, divine saviour, and society.'

'John Locke’s Christianity is an impressive scholarly work that locates important historical and theological distinctions within 17th century Christianity and uses these distinctions, as well as Locke’s own religious writings, to make a strong textual and contextual case that Locke’s Christianity was both unique and sheds light on theological complexities inherent in epistemological, metaphysical, moral, and political aspects of his thinking. This remarkably detailed work occupies an otherwise unfilled and welcome place in Locke studies.'

'Through a careful study of the relevant publications and manuscripts, in this admirable book Diego Lucci both presents a reconstruction of John Locke’s biblical Christianity and makes a compelling case for its importance to understanding his moral, philosophical and political thought. Lucci not only establishes the importance of theology to Locke, but demonstrates that it helped bind together his various intellectual endeavours.'