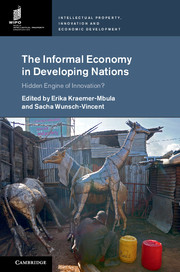 The Informal Economy in Developing Nations
Hidden Engine of Innovation?
Buy print or eBook[Opens in a new window]

from 2 - Innovation in the Informal Economy

To fill this gap, the chapter looks at the characteristics of innovators, the types of innovations and the differences between innovation in the informal and the formal economies. Significantly, it does this in a way that supports measurement of the activities through surveys and case studies. This draws on experience of measuring the introduction of new or significantly improved goods or services onto the market (formal or informal) and the development of new or significantly improved processes that get goods or services to market in a better way (the transformation of inputs into outputs and their delivery, the organization of the business and the use of business practices, and the development of existing markets or the discovery of new ones).

While these four types of innovations – product (goods or services) and three types of processes – are found in the Oslo Manual, the Manual also observes that “informality is not a favorable context for innovation” (OECD/Eurostat 2005, p. 137). But the authors of this chapter show that innovation does happen in the informal sector and that its characteristics can be identified.

What is different in the informal sector is the emphasis on problem-solving and learning by doing, interacting and using rather than the formal generation of knowledge through R&D, leading to new products and processes and the protection of intellectual property through formal instruments. Skills, absorptive capacity for knowledge and technological capabilities are limited, and “firms” are small, yet there is innovation that goes beyond just innovation for survival.

This raises a number of issues that need to be understood in order to develop our understanding of innovation in the informal economy. How big are the entities that engage in innovation? What are they? What linkages exist between them and other groups and institutions, both formal and informal? What characteristics does the market have (if indeed there is a market)? And what are the implications of all this for policy?

The fieldwork reported in this book finds that the bulk of firms in the informal economy are micro-firms that may just be a means of surviving for the entrepreneurs; then come the “constrained gazelles” with limited resources; and then the few high-growth firms. Such a classification supports a differentiation of the analysis of the dynamics of firm activity in the informal sector. Of course, this distribution of firm size is also found in developed and formal economies, where 90 percent of firms will have fewer than twenty employees and the activity of innovation is size-dependent: generally large firms have a higher propensity to innovate.

However, there is a question about what is a firm in the informal sector. It could be a sole proprietorship, a family group, a faith group or some other group whose members have a reason for coming together to engage in an economic activity. As the group operates in the informal economy, it is unlikely to be registered and it is difficult to study using conventional survey methods. While formal firms sell to markets at economic prices, informal firms may be motivated by other things – providing employment to the community or serving some other element of the common good.

This brings the concept of “market” into question, and that is an issue in measuring innovation. For there to be innovation, the Oslo Manual requires that the new or significantly improved product be put on the market or that the new or significantly improved process (of any of the three types discussed) gets product to market in a better way (see Chapter 8 of this book). This question of the role of the market does not just arise in the informal economy, it is present when dealing with public sector activities; these may be identical to the innovation activities specified in the Oslo Manual, but, when it comes to the activity of innovation, the connection with the market is not there. The same problem arises when consumers modify goods or services to meet their own needs, as they do not bring their product to market and, in spite of an extensive literature on “user innovation” (von Hippel Reference von Hippel2005), the consumers are not innovators according to the Oslo Manual.

The discourse around public sector innovation (Bloch Reference Bloch and Gault2013) and consumer innovation (de Jong and von Hippel Reference de Jong, von Hippel and Gault2013) led me to suggest that the phrase “introduced on the market” in paragraph 150 of the Oslo Manual be replaced by “made available to potential users” (Gault Reference Gault2012). This would allow an institution in the public sector to be classified as an innovator, and the same would hold for consumers so long as they share the product or knowledge of the product with potential users. I raise the point again here as it also has applications in the study of the informal economy when the “innovation” is transferred through non-market transactions.

Firms or groups of like-minded people can innovate and can make their product available. As in the formal economy, they are actors in a system, where the firm interacts with other firms and consumers and is acted upon by framework conditions that may present barriers or opportunities for the firm to thrive. Understanding these linkages with other institutions and accounting for education and skills, culture, health and history is part of understanding an innovation system, and innovation systems are present in informal economies just as they are in the formal economy. The actors may be smaller, the human and financial resources more limited, and the barriers greater, but the actors engage in their activities and are influenced by their linkages, giving rise to short-term outcomes and longer-term social and economic impacts. Understanding this is part of the creation of a subject that addresses innovation in the informal economy, and which studies the science of innovation policy (Gault Reference Gault, Husbands Fealing, Lane, Marburger and Shipp2011).