Home
How the East Was Won

How the East Was Won

Barbarian Conquerors, Universal Conquest and the Making of Modern Asia 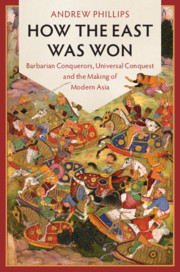 How did upstart outsiders forge vast new empires in early modern Asia, laying the foundations for today's modern mega-states of India and China? In How the East Was Won, Andrew Phillips reveals the crucial parallels uniting the Mughal Empire, the Qing Dynasty and the British Raj. Vastly outnumbered and stigmatised as parvenus, the Mughals and Manchus pioneered similar strategies of cultural statecraft, first to build the multicultural coalitions necessary for conquest, and then to bind the indigenous collaborators needed to subsequently uphold imperial rule. The English East India Company later adapted the same 'define and conquer' and 'define and rule' strategies to carve out the West's biggest colonial empire in Asia. Refuting existing accounts of the 'rise of the West', this book foregrounds the profoundly imitative rather than innovative character of Western colonialism to advance a new explanation of how universal empires arise and endure.

‘Andrew Phillips has done it again - this book will completely change how you think about empires, as well the competition between the East and the West.’

‘How the East was Won brilliantly shows how peripheral groups overcame more powerful polities to create universal empires. Andrew Phillips demonstrates how these groups created such empires not by assimilating subject peoples but by a strategic process of cultural differentiation. They established diversity regimes that maintained the unique identity of the dominant elite, while simultaneously yoking culturally diverse indigenous elites to the conquest elite. In comparing the British Raj to Manchu and Mughal rule, he challenges the preconception that Western colonial empires differed fundamentally from the Asian empires. Instead of displacing indigenous practices, the British layered on to existing practices. Rather than see the current international order, as propelled by “the Rise of the West,” we might thus conclude that order has been infused with the hybridization of West and East from its infancy.’

'A sweeping and beautifully-written explanation of how the Mughals, Manchus and British created vast and powerful empires and left lasting legacies for world order. This book is a definitive contribution to the creation of modernity and the study of global historical International relations.'

'In this magnificent book Andrew Phillips takes us on a fascinating and deeply insightful journey beyond IR's Eurocentric frontier to challenge many of the continuing theoretical/conceptual assumptions of the discipline. He reveals the near-ubiquity of hierarchical Asian empires in the early modern period and how these shared many similarities in their origins and modalities of rule with the British empire as well as how international politics was forged through the interweaving of Western and Asian agency.'

'Phillips’ masterful book on the Mughal Empire (c.1526-1858), the Qing Empire (c.1644-1912), and the British Raj (c.1765-1947) ambitiously challenges the received wisdom about early modern Asia. The author highlights that the West was initially backward so that Western colonialism could succeed only because it was built on Asian precedents of imperial emergence, expansion and consolidation. The winning formula was a ‘define-and-conquer’ and ‘define-and-rule’ strategy that curated identities to facilitate cultural appropriation and local collaboration. The resulting mega-states of ‘India’ and ‘China’ are modern inventions rather than the manifest destiny of supposedly unified and ancient civilizations. This book is a must read for students of international relations, comparative history, East Asia, India and China.'