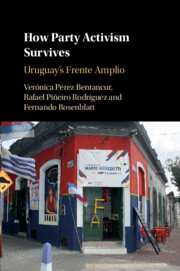 Political parties with activists are in decline due to various external shocks. Societal changes, like the emergence of new technologies of communication have diminished the role and number of activists, while party elites increasingly can make do without grassroots activists. However, recent scholarship concerning different democracies has shown how activism still matters for representation. This book contributes to this literature by analyzing the unique case of the Uruguayan Frente Amplio (FA), the only mass-organic, institutionalized leftist party in Latin America. Using thick description, systematic process tracing, and survey research, this case study highlights the value of an organization-centered approach for understanding parties' role in democracy. Within the FA, organizational rules grant activists a significant voice, which imbues activists' participation with a strong sense of efficacy. This book is an excellent resource for scholars and students of Latin America and comparative politics who are interested in political parties and the challenges confronting new democracies.

'This must-read book provides a crucial glimpse of the way one contemporary political party has maintained a vibrant base of constituents even as other parties have emaciated their grassroots infrastructure. This carefully researched, utterly innovative book helps us understand how political parties can help rebuild democracy in the twenty-first century.'

'This book reveals the organizational traits and forms of activism that have made Uruguay's Frente Amplio one of the most resilient leftist parties in Latin America. By explaining how party activism survives, it challenges conventional wisdom about the decline of mass party organizations and their participatory grassroots structures.'

'The theoretical implications of this study are far-reaching. The authors identify the selective and collective incentives that bring activists to invest their effort on party activities. They test their theory using the largest survey of activists implemented in Latin America, text analysis of party-meeting documents, and process-tracing of party administration.'

'Using rich, new evidence about one of Latin America’s most successful left parties and a sophisticated, multi-method approach, the authors explain why Uruguay’s Frente Amplio has been able to avoid oligarchization, challenging conventional wisdom, and remind us of the ways in which party activism invigorates democracy and improves policy formation.'

‘… a superb book and a must-read for scholars interested in parties and democracy … The effect is an impressive, persuasive piece of scholarship. Party and democracy scholars would do well to read it.’

‘Verónica Pérez, Rafael Piñeiro, and Fernando Rosenblatt have written a stellar book. It is empirically rich, theoretically interesting, and methodologically exemplary. Regarding method, the authors expertly apply cutting edge qualitative tools - thick description, systematic process tracing, a large online survey - to support their central descriptive and causal claims. The effect is an impressive, persuasive piece of scholarship. Party and democracy scholars would do well to read it.’

‘This book is an exemplary study of institutional stability and continuity. The authors tell a compelling story about why and how the FA has endured as a leftist, mass-organic party despite exogenous changes and endogenous challenges.’