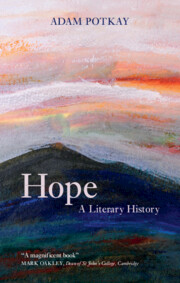 Hope for us has a positive connotation. Yet it was criticized in classical antiquity as a distraction from the present moment, as the occasion for irrational and self-destructive thinking, and as a presumption against the gods. To what extent do arguments against hope today remain useful? If hope sounds to us like a good thing, that reaction stems from a progressive political tradition grounded in the French Revolution, aspects of Romantic literature and the influence of the Abrahamic faiths. Ranging both wide and deep, Adam Potkay examines the cases for and against hope found in literature from antiquity to the present. Drawing imaginatively on several fields and creatively juxtaposing poetry, drama, and novels alongside philosophy, theology and political theory, the author brings continually fresh insights to a subject of perennial interest. This is a bold and illuminating new treatment of a long-running literary debate as complex as it is compelling.

'Adam Potkay traces the fascinating, tangled history of hope through the centuries, from classical antiquity to the present day, moving with apparently effortless intellectual grace between literature, philosophy, political thought, and theology. It is a work of great humanity as well as immense but lightly worn erudition, a truly memorable account of this most ambiguous of all the virtues.'

'How hopeless is it to be hopeful? In this magnificent book, Adam Potkay takes us on a literary tour to discover how some have thought hope to be an illusion best avoided, whilst others have believed it to be a virtue that saves souls or effects political change. At a time when hope is spoken of as a positive emotion, but somewhat lacking in substance, this is an important contribution to help clarify whether reality is ultimately trustworthy enough to revitalise the concept for a new generation.'

'Hope: A Literary History is an impressive accomplishment, unusual in its breadth, deeply learned, and engagingly humane in sensibility. Hope is a virtue in common parlance, the optimistic face we turn against a bleak fate. But Potkay traces the origins of this virtue to an equally deeply rooted sense of hope as an irrational flight from reality. These contesting and opposed ideas of hope make for dramatic movements in intellectual history, from the classical and pre-Christian eras through the Enlightenment, Romanticism, and the successive modernisms and post-modernisms of the twentieth century. Potkay’s unique gifts as a historian and reader make him an ideal and genial guide through vast and fascinating cultural territory.'

'Hope has a history. Potkay traces this history through central literary texts from Greek antiquity to Camus and Beckett, appropriately supported by philosophical, theological and political reflections on hope. Presenting the shifting cases for and against hope with clarity and engagement, he invites his readers to face the challenge of hoping in a world of diverse desires. A great book!'

'… a model of literary history.'