Home
Great Judgments of the European Court of Justice

Great Judgments of the European Court of Justice

Rethinking the Landmark Decisions of the Foundational Period 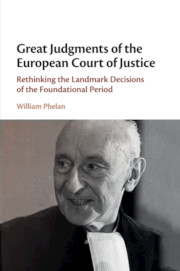 Great Judgments of the European Court of Justice presents a new approach to understanding the landmark decisions of the European Court of Justice in the 1960s and 1970s. By comparing the Court's doctrines to the enforcement and escape mechanisms employed by more common forms of trade treaty, it demonstrates how the individual rights created by the doctrine of direct effect were connected to the practical challenges of trade politics among the European states and, in particular, to the suppression of unilateral safeguard mechanisms and inter-state retaliation. Drawing on the writings and speeches of French Judge and President of the Court, Robert Lecourt, it demonstrates that one of the Court's most influential judges shared this understanding of the logic of direct effect. This book offers a distinctive interpretation of the Court of Justice's early years, as well as of the purpose of the fundamental principles of European law.

‘This book adds something original and enriching to EU law: a new perspective on direct effect which is both persuasive and disruptive. Its core argument deserves to become part of the canon of the field, something that every scholar and teacher of the law must integrate into their thinking if they wish to understand why direct effect exists and what it means for the European Union. Phelan's explanation of how direct effect made possible the ending of inter-state retaliation, and thereby the construction of supranational integration as we now know it, is based on careful analysis of a series of key judgments and the judges who wrote them. The story he tells shines a light on direct effect which is every bit as illuminating as the stories about individual rights and effectiveness upon which lawyers have relied until now.'

‘William Phelan's monograph presents crucial new thinking on the early jurisprudence of the European Court of Justice, contributing to a broader effort by historians, lawyers, and other social scientists to reconsider the foundations of the integration project. This book solidifies Phelan's leadership role in that critical project, providing an abundance of new insights into the Court's ‘great judgments' (while adding a few new judgments to the standard canon for good measure). This is first-rate and innovative scholarship that demands the attention of both specialists and students alike.'

‘William Phelan tells a compelling and original story about how European legal doctrines were part of a grand plan of some of the Luxembourg judges, such as Robert Lecourt, against inter-state retaliation, self-help by Member States, and nationalist revivals. This book will be a basic reference point for future EU legal scholarship.'

‘This analysis is compelling and offers a refreshing new look on the beginnings of European legal integration. It also lays out convincingly that Robert Lecourt, a key actor behind the Court’s case law, cared strongly about the exclusion of self-help from the EEC Treaty system … Phelan opens up a captivating new perspective on the beginnings of European law, which deserves to be investigated more in-depth in the future.’

‘This stimulating book could, put succinctly, be described as an ode to [ECJ judge] Robert Lecourt, who is certainly its hero … Phelan has done a major service in drawing attention anew to Lecourt’s ideas and demonstrating that there are additional dimensions to the classic approach to direct effect and supremacy that should not be left out of account and which in fact enrich our understanding of the novelty of the ECJ’s case law and the influence of one of its greatest members. This work deserves to be widely read - and not merely consulted.’

''Give me a break' was my thought when this book landed on my desk … 'Been there, done that!!' But if you are like me, you know the cases, you know what you are going to say about them when you teach them … When have you last actually gone and reread them or … when have you last 'rethought' them? … It is precisely that familiarity, coupled with Phelan’s clear and clarifying style of writing, which makes this a good read. I gulped it down on one grey Covid Sunday (blessedly it weighs in at a mere 240 pages) and found myself learning something new and/or thinking somewhat differently on each of these cases about which I had imagined I could not learn anything new. I also found myself disagreeing with several points along the way, but there is a pleasure in that too.'