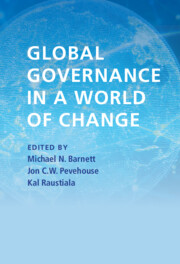 One of the participants in the project recently reminded us that this volume has been a very long time in the making. Although we think the comment was intended for other purposes, we choose to take the high road and see it as a reminder that we have many people to thank for their insights, involvement, and patience. First and foremost, the survivors who can count this outcome as a reward. It might not be much, but, like global governance itself, it is probably better than the alternatives. Many of the contributors to the volume were part of the project from the very beginning, while others joined later. Regardless of their length of service, they were great company and critics, making the ride both more enjoyable and intellectually stimulating. And we do want to thank all the participants for their persistence and resilience. In many ways the project could have been a self-study in modes of governance, but that might be an overly generous description of the editors’ leadership.

All projects have benefactors and we have three that helped fund the three workshops. The first workshop was held at the George Washington University and was funded by the Provost’s office through Michael Barnett’s research funds. The second workshop was funded by the Social Trends Institute (STI) and held in Barcelona. We cannot thank STI enough, and our dear friends Dr. Carlos Cavallé and Tracey O’Donnell for their generous financial support and friendship. They were incredible hosts and the best funders any project could ever hope to have. They also helped to fund the third workshop, which took place at the Graduate Institute of International and Development Studies in Geneva. We are indebted to Liliana B. Andonova for initiating this possibility and then putting together a coalition to help make the workshop possible. We would like to join Liliana in thanking the Center for International Environmental Studies (CIES) and the Center for Trade and Economic Integration (CTEI), both of whom supported the Geneva meeting. Dr. Joelle Noailly (CIES) and Theresa Carpenter (CTEI) facilitated the organization of that meeting.

Over the years, workshops, and invited lectures, we received many comments from many colleagues, some of whom also wrote memos and papers for our early conferences. We are going to try and name them all, but undoubtedly will miss a few, and apologize in advance: Ayelet Berman, Joost Pauwelyn, Tom Hale, Oliver Westerwinter, Esther Brimmer, Tana Johnson, Tim Maurer, Aisling Swaine, Bill Burke-White, Tom Weiss, Abe Newman, Martha Finnemore, Ken Abbott, Erik Voeten, Kate McNamara, Susan Sell, Stewart Patrick, Amitav Acharaya, Henry Farrell, David Bosco, Janice Stein, Ilona Kickbusch, and Jacqueline Best. We have individually given presentations and received helpful feedback on the Introduction at the following universities: Princeton University, the Graduate Institute in Geneva, and Temple University.

We have the great fortune of becoming accustomed to thanking John Haslam for his support and candor.