Home
The Firebird and the Fox

The Firebird and the Fox

Russian Culture under Tsars and Bolsheviks 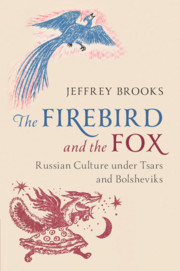 Showcasing the genius of Russian literature, art, music, and dance over a century of turmoil, within the dynamic cultural ecosystem that shaped it, The Firebird and the Fox explores the shared traditions, mutual influences and enduring themes that recur in these art forms. The book uses two emblematic characters from Russian culture - the firebird, symbol of the transcendent power of art in defiance of circumstance and the efforts of censors to contain creativity; and the fox, usually female and representing wit, cleverness and the agency of artists and everyone who triumphs over adversity - to explore how Russian cultural life changed between 1850 and 1950. Jeffrey Brooks reveals how high culture drew on folk and popular genres, then in turn influenced an expanding commercial culture. Richly illustrated, The Firebird and the Fox assuredly and imaginatively navigates the complex terrain of this eventful century.

‘Just before and after the October Revolution, the Russian literary, artistic, and performing arts enjoyed a moment of unprecedented brilliance. Brooks casts this Silver Age against the backdrop of Russia’s radical renovations in commerce, industrial economy, and social structure - the result being a rich and effervescent synthesis of cultural, material, and political enquiry.’

‘Brooks brings a lifetime of learning to bear in his new interpretation of Russian and Soviet culture in its most creative century. He is able to suggest how a variety of cultural fields over time grappled with the same set of recurring Russian dilemmas, distilling the powerful motifs that writers, artists, and intellectuals repeatedly embroidered into their works. No one who studies or loves Russian culture can afford to ignore this book.’

‘An immensely enjoyable and marvelously informative book placing the visual arts within the context of wider cultural developments, illuminating inter-relationships between creative individuals working in different media, and revealing the playfulness, humor, and political dissidence of artists operating under the Tsars and the Bolsheviks. An education and a joy to read.’

‘Monumental in scope and rigor, gentle in its approach to the fragility of the new material it uncovers, and written with irresistible force and mischievous wit, Brooks demonstrates why exactly we love Russian culture and could not do without its magic.’

‘Brooks introduces the reader to wondrous dimensions of Russian cultural creativity. By breaching the distinction between low and high culture, he reveals how popular themes and imagery permeated great works of literature and the arts, leavening their serious-minded discourse with doses of magical thinking and imagination.’

‘This book provides an illuminating history of a century of Russian genius … The result is a rewarding study of artistic production across a century of emancipation, industrialization, and professionalization; reaction and revolution; the creation and canonization of Russian classics; and innovation and repression.’

‘… The Firebird and the Fox is a valuable book not only for scholars … but also for all readers interested in gaining a greater knowledge of Russia’s past culture.’

‘The Firebird and the Fox [is] … a distinctly wholesome book. Without being naïve, it assumes that the first step toward making things better is to look for something good … uncanny and exhilarating …’

‘Brooks addresses the vast cultural panorama of a century of Russian life, revealing elements of oral folklore, popular culture, fairy tales, legends and of their visual representations in the work of avant-garde artists and poets … High and mass culture, drawing subjects and inspiration from the same sources, created a complex and not always harmonious ‘ecosystem’, especially in the sphere of artistic taste. But most importantly, through all the trials of the era, Russian culture sustained the theme of man's moral self-reliance, which, as Brooks proves, is the very engine and highest value of cultural life.’

‘Brooks investigates the traces of a great cultural heritage which, far from yielding to social, economic and political upheavals, has continued to renew and transform itself, in a dizzying ups and downs which constitutes its specificity: the creative energy of the lower social classes fed the artistic experimentation of the cultural elite; in turn, the innovations of elite art descended again, finding diffusion in the media of mass communication, and starting new exchanges. In this incessant cultural circuit, where firebirds and foxes coexist and interact, releasing ever new creative energy, the Author captures the secret of the extraordinary artistic vitality of the Russian people.’ [Translated from the Italian]

‘This book may be regarded as the culmination of a dialectical trilogy by Jeffrey Brooks … Now he looks for threads of continuity and commonality across a whole century from the folktales of the 1850s through to the late Sergei Prokof΄ev and Andrei Platonov. Rather than presenting a straightforward opposition between pre-revolutionary dynamism and Bolshevik constraint, he finds the key to modern Russian culture in the interplay between elite and popular culture and an associated quest for a national (not just imperial) identity. Always in the background is the classic Russian question of the civic role of art and the artist… Brooks's subject is the process of reimagining, which he shows as a never-ending dialogue between high and low culture.’

‘… The Firebird and the Fox is a rigorous and highly engaging study that brings Russian culture to life. This book was a pleasure to read and will be of interest to scholars and students of modern Russian history.’