Home
The Estate Origins of Democracy in Russia

The Estate Origins of Democracy in Russia 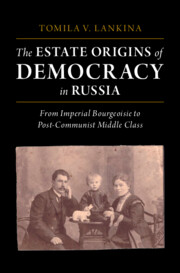 A devastating challenge to the idea of communism as a 'great leveller', this extraordinarily original, rigorous, and ambitious book debunks Marxism-inspired accounts of its equalitarian consequences. It is the first study systematically to link the genesis of the 'bourgeoisie-cum-middle class' – Imperial, Soviet, and post-communist – to Tzarist estate institutions which distinguished between nobility, clergy, the urban merchants and meshchane, and peasants. It demonstrates how the pre-communist bourgeoisie, particularly the merchant and urban commercial strata but also the high human capital aristocracy and clergy, survived and adapted in Soviet Russia. Under both Tzarism and communism, the estate system engendered an educated, autonomous bourgeoisie and professional class, along with an oppositional public sphere, and persistent social cleavages that continue to plague democratic consensus. This book also shows how the middle class, conventionally bracketed under one generic umbrella, is often two-pronged in nature – one originating among the educated estates of feudal orders, and the other fabricated as part of state-induced modernization.

‘Tomila Lankina has written a deeply original and meticulously researched study of historical sociology with profound implications for how we understand politics in today's Russia.  The Estate Origins of Democracy in Russia challenges the widespread scholarly consensus that communism fundamentally altered Russia's social structure. Instead, Lankina demonstrates important continuities – most significantly, the persistence of the Russian pre-revolutionary middle class through decades of communist rule, and its reemergence in its aftermath.'

‘Tomila Lankina conducts a unique in-depth study of roots and mechanisms of societal resilience and reproduction in Russia for over a century of major transformations. She masterfully combines the use of statistical datasets, extended case studies, macro-sociological interpretations, and micro-historical narratives and offers a novel interdisciplinary framework for a comparative analysis of long-run societal dynamics and its political implications. This book successfully brings society back into our understanding of political developments in Russia and beyond.'

‘Elegantly crafted, beautifully written, richly illustrated, and rigorously evidenced, this book provides an axial twist to Soviet and Russian history and an exemplary, landmark study of the resilience and reproduction of social structures, social identities, and social distinctions, and their significance for politics. Lankina's masterpiece is Tolstoyan in its epic breadth of coverage, evocative powers, and intimate unpacking of the lives and times of Russia's meshchanstvo.'

‘This fascinating book challenges our view of the Soviet period as a rupture in Russia's historical development. The author shows that social hierarchies from the late imperial period thrived under communism and also continue to influence human capital, values, and democratic processes in Russia today. In addition to rigorous statistical evidence, she weaves in anecdotes and interviews that make her arguments more vivid and compelling. Anyone interested in historical legacies, social inequality, and democratic development needs to read this meticulously executed book.'

‘The Estate Origins of Democracy in Russia is an exemplar of the new historical political economy. No dilettante, Tomila Lankina does the work of both historian and social scientist in this magisterial work. This is a model for interdisciplinary scholarship.'

‘In this brilliant, erudite, and broad-ranging work, Lankina provides a novel ‘genealogical' perspective on Russian politics, demonstrating how the Russian Empire's urban middle class continues to influence patterns of political and economic development. In so doing, she questions established understandings of the communist experience and reveals the critical role played by families in the reproduction of forms of social stratification over the long run.'

'A richly textured study of historical continuities in the face of revolutionary change. Lankina’s meticulous account of the pre-communist origins of Russia’s post-communist society sheds new light on the logics of persistence and resilience in Russian social structure that shape political possibilities in the present day. Estate Origins is a rewarding read for anyone interested in the social requisites of democracy.'