Home
The Dread Plague and the Cow Killers

The Dread Plague and the Cow Killers

The Politics of Animal Disease in Mexico and the World 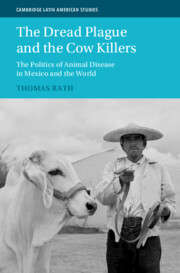 Between 1947 and 1954, the Mexican and US governments waged a massive campaign against a devastating livestock plague, aftosa or foot-and-mouth disease. Absorbing over half of US economic aid to Latin America and involving thousands of veterinarians and ranchers from both countries, battalions of Mexican troops, and scientists from Europe and the Americas, the campaign against aftosa was unprecedented in size. Despite daunting obstacles and entrenched opposition, it successfully eradicated the virus in Mexico, and reshaped policies, institutions, and knowledge around the world. Using untapped sources from local, national, and international archives, Thomas Rath provides a comprehensive history of this campaign, the forces that shaped it – from presidents to peasants, scientists to journalists, pistoleros to priests, mountains to mules – and the complicated legacy it left. More broadly, it uses the campaign to explore the formation of the Mexican state, changing ideas of development and security, and the history of human–animal relations.

‘Rath’s superb study is a model of intrepid historical investigation, explanatory clarity, analytical acuity, and narrative grace. The stories of faked pig deaths, cattle hidden in volcanic craters, strychnine-filled syringes strapped to the hoods of jeeps, armed livestock inspectors, and deadly assaults on veterinarians make for compelling reading. However, in Rath’s hands, they also constitute the all-too-human evidence of the bio-political stakes of managing animals and germs and the fraught development of Mexico’s post-revolutionary ‘livestock state’.’

‘Through a national and transnational narrative centered on humans, animals, germs, and their interactions, Rath shows there was nothing ‘natural’ about the disease and shows instead how capitalism, state-making, diplomacy, and scientific debate shaped the reception, diffusion, and eventual demise of this dreaded plague. A remarkable and vastly researched work that pushes against conventional narratives of domination, coercion, and resistance in Mexico and beyond.’

Gema Kloppe-Santamaría - author of In the Vortex of Violence: Lynching, Extralegal Justice and the State in Post-Revolutionary Mexico

‘This book is a must-read for anyone interested in postwar US-Mexico relations, social mechanisms of opposition, resistance and negotiation, modernization and development. Through extensive research, Rath with clarity analyzes the aftosa campaign and ties together its effect on state formation, international relations and the ecology of animal-human coexistence.’

‘Rath’s story of cows and how to kill them is an extraordinary work. Told with verve, intelligence and a wry wit, it is an original meeting of political, environmental and new US imperial history. It also lays out - with clarity and style - the emergence of Mexico’s one-party state. One of the two or three most important books on mid-century Mexico.’

Benjamin T. Smith - author of The Dope: The Real History of the Mexican Drug Trade