Love and Loyalty in Wartime America 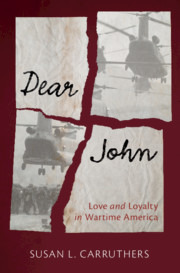 Are 'Dear John' letters lethal weapons in the hands of men at war? Many US officers, servicemen, veterans, and civilians would say yes. Drawing on personal letters, oral histories, and psychiatric reports, as well as popular music and movies, Susan L. Carruthers shows how the armed forces and civilian society have attempted to weaponize romantic love in pursuit of martial ends, from World War II to today. Yet efforts to discipline feeling have frequently failed. And women have often borne the blame. This sweeping history of emotional life in wartime explores the interplay between letter-writing and storytelling, breakups and breakdowns, and between imploded intimacy and boosted camaraderie. Incorporating vivid personal experiences in lively and engaging prose – variously tragic, comic, and everything in between – this compelling study will change the way we think about wartime relationships.

‘Susan L. Carruthers is an eloquent storyteller. She exposes not only the poignancy of love in times of war, but also how perceptions of girlfriends and wives as ‘flight risks’ become powerful stimuli to male solidarity. A captivating history.’

Joanna Bourke - author of War and Art: A Visual History of Modern Conflict

‘This fast-moving journey through a century of soldiers’ heartbreak and rage at being dumped by their sweethearts reveals the psychological distance between the home front and the war theater, but even more tellingly illuminates the eternal war between men and women.’

Nancy F. Cott - author of Fighting Words: The Brave American Journalists Who Brought the World Home between the Wars

‘Whether distraught, amused, or enraged, jilted GIs have long bonded as victims of betrayal. Susan L. Carruthers’s marvellously written new book not only explores the origin and evolution of the 'Dear John' letter, but illuminates the misogyny that often underlies this military brotherhood, the alleged correlation with suicide, and the impact on the writers of these infamous epistles.’

‘Dear John is, dare I say, a pleasure to read, in addition to being incisive regarding the gendering and biases built around the mythopoeia of the epistolary breakup. Carruthers's multidimensional interrogation of the wartime brushoff encompasses fictions, reality, sexual orientation, POWs, social media, and all manner of telling the loved one So long, see you never. This learned and relevant treatment is a unique and deeply researched addition to the literature of broken hearts.’

Anthony Swofford - author of Jarhead: A Marine's Chronicle of the Gulf War and Other Battles

'… an eye-opening study of wartime romances and breakups.'

'Carruthers makes a convincing case that the Dear John letter has helped make women, not war, the culprit for love’s breakdown under pressure.'

‘Her account offers insights into a broader entanglement, involving the militarism that shores up modern nationhood; the emotional and sexual ties that sustain and can destroy men in the military; and the women on whom male soldiers have poured hatred as well as adoration.’