A Tale of Liberty and Revolution in Regency London 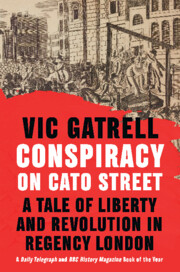 On the night of 23 February 1820, twenty-five impoverished craftsmen assembled in an obscure stable in Cato Street, London, with a plan to massacre the whole British cabinet at its monthly dinner. The Cato Street Conspiracy was the most sensational of all plots aimed at the British state since Guy Fawkes' Gunpowder Plot of 1605. It ended in betrayal, arrest, and trial, and with five conspirators publicly hanged and decapitated for treason. Their failure proved the state's physical strength, and ended hopes of revolution for a century. Vic Gatrell explores this dramatic yet neglected event in unprecedented detail through spy reports, trial interrogations, letters, speeches, songs, maps, and images. Attending to the 'real lives' and habitats of the men, women, and children involved, he throws fresh light on the troubled and tragic world of Regency Britain, and on one of the most compelling and poignant episodes in British history.

‘In his gripping new book, Vic Gatrell rescues the Cato Street conspirators from “the enormous condescension of posterity”, and reconstructs in enthralling detail the world of low taverns, debtors’ prisons and radical extremism from which they came. This is a brilliantly written masterpiece that triumphantly succeeds in restoring humanity and dignity to its subjects.’

‘Erudite, engaging and brilliantly wide-ranging, Vic Gatrell’s Conspiracy on Cato Street is peppered with revealing detail and is compulsively readable. This is historical scholarship at its very finest.’

Emma Griffin - author of Bread Winner: An Intimate History of the Victorian Economy

‘Vic Gatrell has brilliantly resurrected from obscurity the world of the conspirators who plotted to murder the British cabinet in February 1820. With unexampled forensic skill and psychological empathy he has provided a masterly exploration of proletarian London during the Regency.’

Jerry White - author of London in the Nineteenth Century: A Human Awful Wonder of God

'Enriched by Gatrell’s observation that “the inequalities and deprivations that moved the conspirators, and the privileged interests and powers that contained them, still operate,” this is a fine-grained study of political extremism in action.'

‘Gatrell's intense study of the men's lives - and what brought them to believe that violently overthrowing the government could solve their problems - is forensic and vivid in its detail.’

‘This is micro-history at its richest and its most penetrating. More than giving us a social history in a few lives, Gatrell has told us a human story with the depth of a novel.'

‘a panoramic and thrilling study of an overlooked part of British history.’

‘Gatrell asks all the right questions of his subject, and his answers are sound and illuminating.'

‘Terrific … the richest account of the Cato Street conspiracy ever written.’

'Gatrell writes passionately as a radical historian championing the underdog and castigating inequality.'

'There is no better guide to metropolitan high and low life than Gatrell … [In] an enthralling classic of London history, [he] eschews what he sees as the stifling pieties of labour history in favour of individual character and lived detail, professing a Dickensian empathy for the 'muddled attitudes, slogans and resentments' of ordinary Londoners … Cato Street is underdog history at its purest.'

'Vic Gatrell tells this sorry story with zest and sympathy … Conspiracy on Cato Street follows the trail of his Hanging Tree (1994), City of Laughter (2006) and The First Bohemians (2013) in its capturing of Regency London in all its gaiety, violence, sexual sprawl and, above all, searing poverty. His trigger finger trembles with passion as he takes aim at the romantic curricles-and-crinolines view of the period … Gatrell says at the beginning of his salutary and often startling account that ‘a book of this kind cannot help speaking to the present.'

‘Vic Gatrell is that rarest of people; an academic historian steeped in the archives who can write the most beautiful prose. Conspiracy on Cato Street brings his trademark erudition and style to bear … [in this] wonderful book.'