A Celebration of the Work of Ron Graham 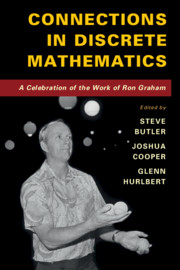 Discrete mathematics has been rising in prominence in the past fifty years, both as a tool with practical applications and as a source of new and interesting mathematics. The topics in discrete mathematics have become so well developed that it is easy to forget that common threads connect the different areas, and it is through discovering and using these connections that progress is often made. For over fifty years, Ron Graham has been able to illuminate some of these connections and has helped to bring the field of discrete mathematics to where it is today. To celebrate his contribution, this volume brings together many of the best researchers working in discrete mathematics, including Fan Chung, Erik D. Demaine, Persi Diaconis, Peter Frankl, Alfred W. Hales, Jeffrey C. Lagarias, Allen Knutson, Janos Pach, Carl Pomerance, N. J. A. Sloane, and of course, Ron Graham himself.

'Over the past half century, discrete mathematics has had a stunning rise from bargain basement topology to a vital and highly respected part of the mathematical world. Ron Graham has played a critical role in this explosive change, both with his deep results and his leadership in the mathematical community. This work contains beautiful mathematics from some of Ron's many collaborators combined with warm personal reflections on working with Ron.'

'Ron Graham made important and lasting contributions to many areas of combinatorics, and this book is a celebration of his work. It contains a collection of very interesting papers written by the leading experts in discrete mathematics, covering such diverse topics as number theory, probability, graph theory, discrete geometry, and algebraic combinatorics.'

'Discrete mathematics has experienced a spectacular growth during the last fifty years, and has matured into a modern subject with deep connections to many areas. Ron Graham has played a key role in this fascinating development, discovering many of these connections and contributing to the transformation of the field to its current shape. This is a beautiful volume, celebrating the contributions of a superb researcher who has always been, and still is, able to have fun while doing serious mathematics.'

'This is a nice volume commemorating Ron Graham, one of the most influential researchers in discrete mathematics in the last half a century. The contributions of the volume cover a very wide variety of topics, ranging from Graph Theory through Ramsey Theory and Extremal Set Theory to number theoretic papers. As such, the book should be appealing to a large circle of researchers interested in these key subjects.'

'This book, a collection of articles, surveys and retrospectives connected to the life and work of Ron Graham, is a fitting testament to Ron's broad influence on the development of modern combinatorics, touching upon graph theory, Ramsey theory, number theory, quasirandomness, discrete geometry, the theory of polynomials and, of course, juggling.'

'With the rise of computers, discrete mathematics has seen explosive growth over the last half century. Throughout this era, Ron Graham has been leading the field. This book celebrates his numerous contributions and consists of a collection of research and survey articles written by many of the top researchers in the field. It is highly recommended!'

'Two features of the book contribute to making it reader-friendly: its layout, which is very comfortable to read, and the numerous examples that are peppered throughout the chapters.'