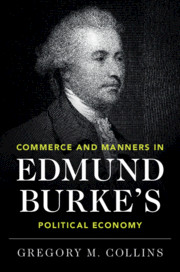 Although many of Edmund Burke's speeches and writings contain prominent economic dimensions, his economic thought seldom receives the attention it warrants. Commerce and Manners in Edmund Burke's Political Economy stands as the most comprehensive study to date of this fascinating subject. In addition to providing rigorous textual analysis, Collins unearths previously unpublished manuscripts and employs empirical data to paint a rich historical and theoretical context for Burke's economic beliefs. Collins integrates Burke's reflections on trade, taxation, and revenue within his understanding of the limits of reason and his broader conception of empire. Such reflections demonstrate the ways that commerce, if properly managed, could be an instrument for both public prosperity and imperial prestige. More importantly, Commerce and Manners in Edmund Burke's Political Economy raises timely ethical questions about capitalism and its limits. In Burke's judgment, civilizations cannot endure on transactional exchange alone, and markets require ethical preconditions. There is a grace to life that cannot be bought.

'With care and rigor leavened by an engaging writing style, Gregory Collins has dramatically advanced our understanding of Burke’s economic thought. This is an indispensable guide for all future Burke scholars.'

'A thorough study of Edmund Burke’s thought on economics in which every aspect is well-considered, every scholar answered, every point nicely phrased. This is a major contribution to Burke scholarship and to our understanding of the beginnings and principles of modern economics.'

‘The book is impressive in its thoroughness on Burke on issue after issue, focusing on his words and deeds.’

‘This very thorough and thoughtful book goes a long way toward setting the record straight.’

‘… the definitive account of Burke’s economic thought, one which shows how Burke’s political economy displays 'an underlying coherence that incorporated elements of prudence, utility, and tradition.'

'Gregory Collins's study of the economic ideas of Burke is a comprehensive achievement. It will set the terms of discussion for a generation on Burke's political economy and its relation to his thinking about manners and morals.'

'Collins’s treatment of an undervalued aspect of Burkean thought will earn the prescriptive right to stand, for a long time, as the definitive study of the Anglo-Irish statesman’s political economy. Collins has done students of Burke and of political economy alike an immense service.'

'The first serious monograph dedicated to examining [Burke’s] views on political economy … An important and original study that adds significantly to our understanding of Burke.'

'A brilliant book, full of insight and illumination.'

'A tremendous achievement, one that reflects a great deal of thought and inspires a good deal of reflection as well … deeply researched and well-argued.'

'A fine book. It makes both an important contribution to contemporary debates about conservatism and freedom and to Burke scholarship.'