A Comparative Theology with Judaism and Islam 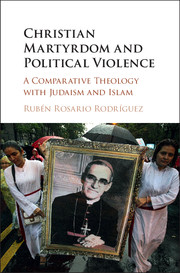 In recent years, martyrdom and political violence have been conflated in the public imagination. Rubén Rosario Rodríguez argues that martyr narratives deserve consideration as resources for resisting political violence in contemporary theological reflection. Underlying the three Abrahamic monotheistic traditions is a shared belief that God requires liberation for the oppressed, justice for the victims and, most demanding of all, love for the political enemy. Christian, Jewish and Muslim martyr narratives that condone political violence - whether terrorist or state-sponsored - are examined alongside each religion's canon, in order to evaluate how central or marginalized these discourses are within their respective traditions. Primarily a work of Christian theology in conversation with Judaism and Islam, this book aims to model religious pluralism and cooperation by retrieving distinctly Christian sources that nurture tolerance and facilitate coexistence, while respecting religious difference.

'This is an exceptional academic contribution to the historical study of martyrdom among the classic Abrahamic religions, but also to its contemporary religious, political, and cultural relevance. It is a highly ambitious project that will leave an enduring mark in the always pertinent field of religiosity and human sacrifice. I strongly recommend its careful and critical reading.'

'Rosario-Rodriguez's attempt at a fundamental theology built around the narratives of martyrdom is a remarkable synthesis of long and serious work in the fields of liberation theology, biblical studies, systematics, interreligious dialogue, 'world church' studies, and moral theology; it is something truly new, and opens a whole fertile field of inquiry. I am especially impressed by the care and integrity with which he approaches Islamic martyr narratives without either assimilating them to the Christian narratives or creating a false partition between their theological meanings.'

'Not only does this book offer a knowledgeable and self-critical reconstruction of the concept of Christian martyrdom, it also makes a plea for a living Christian witness in the globalized world of the twenty-first century.'

'Chapter 3, probably the strongest chapter, discusses the meaning of martyrs and martyrdom in the Jewish and Muslim Scriptures, in 'conversation with the book’s central narrative about Christian martyrdom as nonviolent political resistance'. There is a very careful analysis of the Muslim interpretation of jihad ('struggle'), along with the Christian concept of just war. This chapter also offers a trenchant critique of Christian Zionism, along with Islamist violence, Israeli nationalism, and misuse of just war theory in the American 'war on terror'. These, Rosario Rodríguez asserts, do not reflect their parent traditions, but rather 'imperialist ideologies', like that of ancient Rome, which Christian martyrdom attempted to subvert.'

Source: Journal of Religion and Violence

'[Rubén Rosario] Rodríguez astutely emphasizes that only forgiveness modeled on that of Jesus will break the cycle of violence. This book is an exemplary effort to sort out how a Christian comparative theology of martyrdom would appear. Ultimately, no religion can justify itself without reference to other religions which accompany it through history, sometimes peacefully and sometimes as antagonists. The author has credibly demonstrated that a viable Christian theology of martyrdom can be written and has honored the memory of its witnesses.'