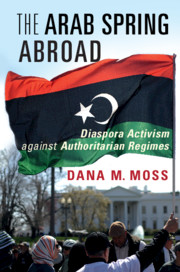 The Arab Spring revolutions of 2011 sent shockwaves across the globe, mobilizing diaspora communities to organize forcefully against authoritarian regimes. Despite the important role that diasporas can play in influencing affairs in their countries of origin, little is known about when diaspora actors mobilize, how they intervene, or what makes them effective. This book addresses these questions, drawing on over 230 original interviews, fieldwork, and comparative analysis. Examining Libyan, Syrian, and Yemeni mobilization from the US and Great Britain before and during the revolutions, Dana M. Moss presents a new framework for understanding the transnational dynamics of contention and the social forces that either enable or suppress transnational activism.

'Dana Moss’s book is a milestone in the combination of quasi-ethnographic methods and comparative-historical analysis. While the Arab Spring is often remembered as a unified wave of mobilization against authoritarian regimes, she shows how diverse it really was. The study crosses two kinds of borders: between the Libyan, Syrian and Yemeni activists who she studied in two host states – Britain and the United States –and she contributes to two bodies of research – diaspora studies and social movements. Moss’s work highlights how many different forms of intervention transnational activists can use – from publicizing and amplifying contention in their home country revolts, to brokering connections among states and activist groups, to direct intervention; but she also shows how varied were the results of their interventions in their three home countries.'

'Dana Moss’s impressive book, The Arab Spring Abroad, follows protest movements beyond the territorial limits of the nation-state, highlighting the role of diasporic mobilization in pro-democracy uprisings in Libya, Syria, and Yemen. Through extensive interviews and systematic comparisons, Moss's analysis is as transnational as the movements it studies.'

'This beautifully written book revamps an old idea to generate fresh insight into how people respond to authoritarianism. Albert Hirschman famously wrote about three available choices we face when met with dissatisfaction: Exit, Voice, or Loyalty. He argued that when people simply exit – if they are able to do so – then conditions continue to deteriorate for those unable to leave. Dana Moss shows us how exit may be the key to bringing about social change if, and only if, exit does not result in disengagement. Her brilliant analysis of diaspora activism in the aftermath of Arab Spring breathes fresh air into studies of power and rebellion.'

Rory McVeigh - Nancy Reeves Dreux Chair Professor of Sociology and Director of the Center for the Study of Social Movements, University of Notre Dame

'The Arab Spring Abroad provides a masterly analysis of how the uprisings in the Middle East and North Africa reverberated across diaspora dissident communities in the West, both energizing and shaping their activist trajectories. Dana Moss's theoretically sophisticated and empirically rich book is a significant contribution to social movement scholarship.'