Home
Anti-Jewish Riots in the Crown of Aragon and the Royal Response, 1391–1392

Anti-Jewish Riots in the Crown of Aragon and the Royal Response, 1391–1392 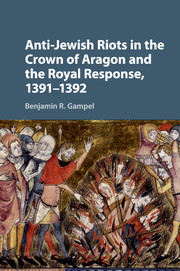 The most devastating attacks against the Jews of medieval Christian Europe took place during the riots that erupted, in 1391 and 1392, in the lands of Castile and Aragon. For ten horrific months, hundreds if not thousands of Jews were killed, numerous Jewish institutions destroyed, and many Jews forcibly converted to Christianity. Benjamin R. Gampel explores why the famed convivencia of medieval Iberian society - in which Christians, Muslims and Jews seemingly lived together in relative harmony - was conspicuously absent. Using extensive archival evidence, this critical volume explores the social, religious, political, and economic tensions at play in each affected town. The relationships, biographies and personal dispositions of the royal family are explored to understand why monarchic authority failed to protect the Jews during these violent months. Gampel's extensive study is essential for scholars and graduate students of medieval Iberian and Jewish history.

‘What set the devastating Iberian riots against Jews in 1391–2 in motion? Why were the rulers of Aragon relatively ineffective in putting down the spiraling late-fourteenth-century violence in their realm? Using rich new data from the Aragonese archives, Professor Gampel addresses both these important questions, provides valuable information on the evolution of the persecution, and cautiously proposes new perspectives about the riots' origins and how the rulers of Aragon dealt with them. In so doing, he illuminates brilliantly one of the major disasters that struck medieval Jewry.'

'… a singular and highly impressive scholarly achievement: the most exhaustive, detailed, and profound analysis to date of the events of ten fateful months, between June 1391 and the end of March 1392, which wrought destruction upon the Jewish communities of Spain … Gampel focuses on the events in the territories ruled by the Crown of Aragon, about which very rich documentation has been preserved; however, his book also sheds light on the consequences of these attacks for all the Jews of Spain. With a sharp eye and absolute mastery of the abundant historical sources, he describes the powerlessness of King Joan and the other members of the royal family, their hesitant intervention during the crisis, their ambivalent attitude toward the conversion of the Jews, and their helplessness in response to the plundering of Jewish property. This is the most important book written so far about what were without doubt the most devastating attacks against Jews in medieval Europe.'

'Anti-Jewish Riots in the Crown of Aragon and the Royal Response, 1391–1392 chronicles one single year’s daily violence, providing a comprehensive survey of the events that led to, and followed, the 1391 massacres that stunned Aragonese Jewries, where religious hatred laid the groundwork, and social and economic dynamics served to incite the bloodshed. … Benjamin R. Gampel masterfully transforms plain facts into a coherent narrative by analyzing the royal response and its concern with the protection of the Jews, and emphasizing how personal contingencies and individual behavior influenced the course of events. The Zeitgeist peeps out throughout the pages of the book, and the reader is provided with many examples of Jews experiencing fear in their daily life, as a result of their persecutors’ 'diabolic spirit'. … The book will certainly take a prominent place within Hispano-Jewish historiography.'

'Using documentation and letters written by the royal family of Aragon, preserved in Aragonese archives, historian Benjamin R. Gampel gives readers the shape and scope of the events in Aragon and the responses of King Joan I and the royal family to the attacks on ‘their Jew'.'

'Gampel's monograph is a fine work and unquestionably a game changer in the scholarship on the riots of 1391. … it is a treasure trove of information for anyone seeking a fuller understanding of … [this] tragedy …'

Maya Soifer Irish Source: The Journal of the Association for Jewish Studies