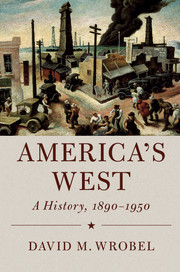 The American West has influenced important national developments throughout the twentieth century, not only in the cultural arena, but also in economic development, in political ideology and action, and in natural resource conservation and preservation. Using regionalism as a lens for illuminating these national trends, America's West: A History, 1890–1950 examines this region's history and explores its influence on the rest of America. Moving chronologically from the late nineteenth- to the mid-twentieth century, David M. Wrobel examines turn-of-the-century expansion, the Progressive Era, the 1920s, the Great Depression and the New Deal, World War II, and the early Cold War years. He emphasizes cultural and political history, showing how developments in the West frequently indicated the future direction of the country.

'From the 'closing of the frontier' to the 'good war', this immensely comprehensive and well-informed book is a fresh history of the West and its place in the nation. Wrobel's take on progressivism and its sequels through the 1940s are invariably nuanced and sensitive. A great read.'

'With this book, David M. Wrobel proves again his mastery of the historian’s craft. Analytic and synthetic, Wrobel breathes life into the symbiotic relationship that shaped the West and, in turn, the nation at large.'

Robert A. Goldberg - University of Utah

'This beautifully written book shows how in the span on a single lifetime the American West was transformed, and how that transformation reshaped US politics and culture during the first half of the twentieth century.'

'David M. Wrobel has written an excellent account of how the American West transitioned in less than sixty years from a colony controlled by distant forces to a region that began to shape the economic, cultural, and political vectors of the country and the world.'

'Wrobel’s established excellence as a scholar of western American history is on full display in this careful examination of the region's cultural, economic, and political complexity.'

'David M. Wrobel's America's West superbly continues Wrobel's complex and insightful contributions to one of our most important historiographical traditions.'