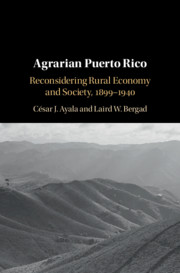 Fundamental tenets of colonial historiography are challenged by showing that US capital investment into this colony did not lead to the disappearance of the small farmer. Contrary to well-established narratives, quantitative data show that the increasing integration of rural producers within the US market led to differential outcomes, depending on pre-existing land tenure structures, capital requirements to initiate production, and demographics. These new data suggest that the colonial economy was not polarized into landless Puerto Rican rural workers on one side and corporate US capitalists on the other. The persistence of Puerto Rican small farmers in some regions and the expansion of local property ownership and production disprove this socioeconomic model. Other aspects of extant Puerto Rican historiography are confronted in order to make room for thorough analyses and new conclusions on the economy of colonial Puerto Rico during the early twentieth century.

'Ayala and Bergad provide an original reading of twentieth-century Puerto Rican history based on a detailed analysis of extensive local tax and census records to 1940. They show that the US colonial government did not carry out a restructuring of land tenure in favor of US capitalists, which is the traditional argument, but maintained both the pre-conquest landowners and the land and labor system, which existed under Spain. Their reconstruction also provides an excellent social and economic history of the island in this period. This work will have a major impact on interpreting both Puerto Rican history and the evolution of the American empire in the twentieth-century.'

'This riveting study of Puerto Rico’s rural economy and society in the early 1900s upends the widely-accepted belief that US colonialism and sugar companies led to the concentration of land and the dispossession of rural Puerto Ricans’ landholdings. Instead, through a painstaking and careful examination of data, the authors show that most land-owning patterns established during Spanish colonial rule continued through the 1930s.'

'With this work, Ayala and Bergad culminate long years of study on the agrarian history of Puerto Rico. The authors provides a solid foundation using the analysis of a large database of fiscal data and other sources, as well as through the performance review of the main branches of commercial agriculture. The reader will find in these pages an explanation so well argued of a crucial process in Puerto Rican history.'

'Agrarian Puerto Rico will unsettle the historiographical landscape, debunking predominant narratives and shifting the terms of scholarly discussion. Its unique examination of the interconnected histories of sugar, coffee, and tobacco is unprecedented and refreshing. With a nuanced inward look at Puerto Rico’s complex rural economy, the book is well balanced with an outward Hispanic Caribbean perspective.'

‘The breadth and scope of Ayala and Bergad’s scholarship are formidable. Agrarian Puerto Rico provides a provocative reappraisal of the impact of the US invasion in 1898 on local agriculture. It will become an obligatory reference for scholars addressing the island’s farming sector.’

‘… a welcome and thorough resource to aid in writing new histories of Puerto Rico.’