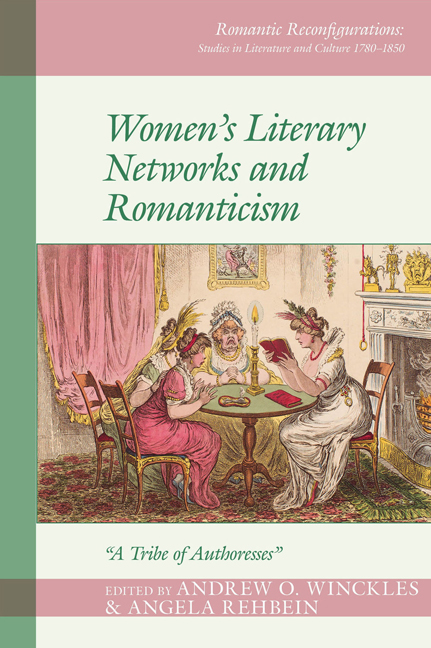 Women's Literary Networks and Romanticism
“A Tribe of Authoresses”

In making the case for the recovery of Mary Tighe in the 1990s scholars often pointed to the adverse impact John Keats’ rejection of Tighe had on her literary reputation for most of the twentieth century as the canon of the big five or six British Romantic-era male poets came into being. Despite the ongoing but unacknowledged influence Tighe's posthumous 1811 Psyche, with Other Poems exerted on Keats in 1819 and 1820 as he composed and published ‘Ode to Psyche’, ‘The Eve of St. Agnes’, and ‘Lamia’, and worked on transforming ‘Hyperion’ into ‘The Fall of Hyperion’, his 31 December 1818 comment on Tighe in a letter to his brother and sister-in-law came to be seen as representative of the canonical male poets’ reception of her work: ‘Tighe and Beattie once delighted me – now I see through them and can find nothing in them – or weakness’. Rather than speaking for the British Romantic community, however, Keats’ comment more directly spoke to his desire to push his poetic agenda forward after the negative reviews of Endymion – a poem that also reflects Tighe's influence – so that he might ‘be among the English Poets after my death’. It is one of the curiosities of twentiethcentury literary history that Keats’ personally motivated comment came to bear such weight and appear to voice a communal response to Tighe, given the plenitude of positive assessments her work received from nineteenth-century readers, writers, and critics in direct or indirect homages. This essay looks at some of the contemporary women writers who invoked Tighe in their works by name, quotation, or epigraph – Anna Maria Porter, Anna Letitia Barbauld, Alicia Lefanu, Lady Morgan, and Felicia Hemans – to consider what those invocations suggest about lines of affiliation, the construction of aesthetic communities, and attempts to shape or forecast reception. I argue that these Romantic-era woman writers create a citational network through the figure and work of Mary Tighe, to call attention to her significance and to establish their own histories of influence and reception.

Such citational practices produce a more expansive version of what Gerard Genette designates the ‘epigraph effect’ in Paratexts, affording opportunities for writers to signal their place in a cultural tradition, to acknowledge or choose their peers and predecessors, and to proleptically instantiate their consecration in a particular literary pantheon.