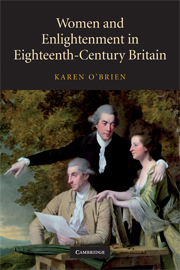 This chapter explores the aftermath and legacy of Wollstonecraft's critique of the Enlightenment idea of the progress of society during the turbulent years of the French Revolution and Napoleonic wars. It is in two parts. The first part is concerned with the models of social progress at work during the first real flowering of women's history in the early nineteenth century, and looks forward to the enduring involvement, throughout the rest of the century, of women historians with historical subgenres such as biography, literary history and art history. The second part considers the enormous challenge to advocates of female progress posed by Malthus's theory that population growth (pre-eminently an issue of female fertility) might set limits to historical development. It explores Malthus's own, complex articulation of the interrelationship between the biological nature and social status of women, and the tendency of populations to grow beyond their means of subsistence. It also considers the engagement by early nineteenth-century women writers with population theory and political economy, and the ways in which they promoted history and economics as, in themselves, a progressive form of female education. The concluding part of the chapter asks, ultimately, whether the Whig, Latitudinarian and Enlightened vision of social progress survived into the nineteenth century; and, if so, how it met and withstood the challenge, not only of Malthusian pessimism, but also of a new force, Evangelicalism, that harnessed the Enlightenment idea of female rationality and social influence to an aspiration for the spiritual and social uplift of poor women and their families by their more fortunate and educated sisters.