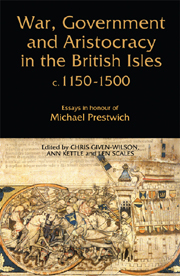 War, Government and Aristocracy in the British Isles, c.1150–1500
Essays in Honour of Michael Prestwich

Ireland lay on an outer edge of the Plantagenet dominions, beyond Wales, itself a land where royal control depended heavily on marcher lordships, many of them in the hands of leading English aristocratic families. The conquest of Ireland, which remained incomplete, had also been the work of magnates, who sought to displace native rulers in the various provinces. Change was deepest in lowland areas of the east and south; further afield, authority was disputed or shared in shifting local balances. As in Wales, leadership might be provided by second-rank families who ‘battled in the country year in year out’. But the continued interest of their superiors was essential: it provided regional coherence, and helped to knit the dispersed core areas of the lordship of Ireland together. And – the main theme of this essay – it was crucial to maintaining Ireland's ties with the crown. These were not things that could be achieved by scanty bureaucratic systems alone. Of course magnates competed, clashing violently on occasions; but this itself provided opportunities for manipulation and for the display of regal magnanimity. Quarrels erupted even at the peak of Edward I's power. But they were most likely to run out of control when kingship itself was infected with faction.

So much might seem obvious: in any extensive medieval polity, the management of outlying regions tended to rest on aristocrats. In Ireland, where even the deeply colonized areas lay close to upland or wooded march districts, this dependence was likely to be heavy. Yet for much of the twentieth century the aristocracy received little attention from historians, whose neglect was sometimes accompanied by a barely veiled hostility.