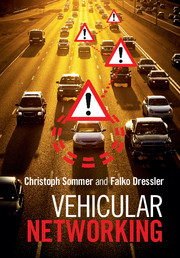 Vehicular Networking
Buy print or eBook[Opens in a new window]

Vehicular networking, the exchange of information in the car and between cars, has been on the mind of researchers since at least the often-cited 1939 New York World's Fair. Here, in its Futurama exhibit, General Motors revealed utopian visions of what highways and cities might look like twenty years later. In fact, many of the visions of intelligent transportation systems (ITSs) showcased there, as well as in the exhibit designer's 1940 book Magic Motorways (Bel Geddes 1940), such as that “car-to-car radio hook-up might be used to advise a driver nearing an intersection of the approach of another car or even to maintain control of speed and spacing of cars in the same traffic lane”, are still being pursued today. Modern vehicles collect huge amounts of information from on-board sensors, and this information is made available to the in-car network and ready for sharing with other cars – not just for the described visions of intersection assistance systems and platooning, i.e., road-train applications, but also for a whole wealth of new applications. Today, with in-car networks merging into networks of cars, these early visions seem closer to reality than ever.

But why did we have to wait this long?

Hugely many research projects have been undertaken since Magic Motorways was written, all of which tried to make visions of ITS a reality (Jurgen 1991). Among the most notable of research initiatives were the Japanese CACS, US ERGS, and European ALI projects for urban route guidance in the late 1960s to late 1970s, the European Prometheus project for autonomous driving (1986–1995), and the US PATH project for cooperative driving (1986–1992). Evidently, the majority of these initiatives led to working prototypes and successful field operational tests; yet, commercial success failed to match the projects' promises.

A possible explanation is given by Chen & Ervin (1990): early approaches were simply too visionary for their time, commonly focusing on infrastructure-less solutions, which could not be supported by current technology. The 1980s then saw a shift of attention from the more long-term goals of complete highway automation to nearer-term goals such as driver-advisory functions.