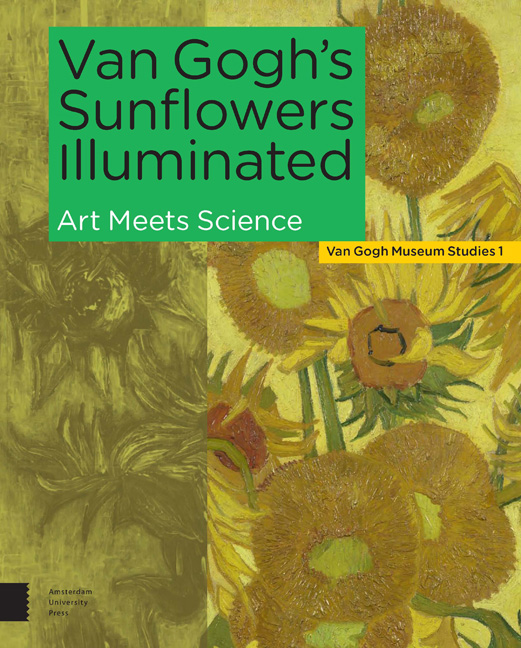 3 - Methods, Materials and Condition of the London Sunflowers

In February 1888, Vincent Van Gogh moved to Arles in the south of France where, during the late summer of 1888 and early in 1889, he painted a number of studies of sunflowers. The most famous of these show a large bunch of sunflowers in a vase against a yellow background. Three variations of this particular composition are known and the two signed versions are now in the collections of the National Gallery in London and the Van Gogh Museum in Amsterdam (figs. 2.10, 2.14). The third version is now in the collection of the Seiji Togo Memorial Sompo Japan Nipponkoa Museum of Art in Tokyo (fig. 2.11).

Van Gogh's working practices and materials employed at all stages of his career have been the subject of extensive technical research, especially in the case of the works produced during his period in Arles. Unique insights can also be gained from the artist's own letters. The Amsterdam and London versions of the Sunflowers, in particular, have been the subject of detailed art-historical and technical studies over many years. The two pictures were reunited for the first time in Amsterdam during the Van Gogh at Work exhibition, which opened in May 2013 at the Van Gogh Museum. The Amsterdam painting then came to the National Gallery for three months in 2014 for a focused exhibition entitled The Sunflowers. This display acknowledged both institutions’ continuing research into Van Gogh's art and prompted a detailed comparison of the materials and development of the paintings, which was published in 2016 by Roy and Hendriks. The material studies of the two paintings were based on the analyses of paint samples from both works, but also benefited from new insights into the Amsterdam version made possible by the application of a range of non-invasive analytical techniques including reflection mid-FTIR and Raman point analyses and macro scanning X-ray fluorescence spectrometry (MA-XRF), as described in more detail in subsequent chapters. Reuniting the two paintings also allowed a discussion about possible changes in their appearance that have occurred over time, drawing on the detailed research into pigment deterioration mechanisms presented in chapter 5 and made possible by the application of synchrotron radiation-based X-ray imaging and analytical techniques (see chapter 8).