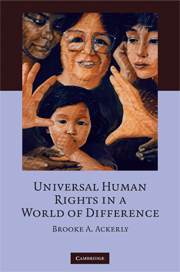 1 - Universal human rights in a world of difference: challenging our thinking

Feminist activists have done the apparently impossible: they've shown us how to think about human rights as local, universal, and contested. They have shown us that contestation over human rights is not evidence that rights do not exist. Rather, contestation provides a basis for understanding their universal meaning. Or so I argue here.

Before we get to that argument, let us consider why we need a political theorist to argue that there are human rights and human rights violations. Do we need a theorist to tell us that our moral intuitions are universal? That sounds like the basis for imperialism. Can a political theorist offer any argument that would persuade a torturer that torture is wrong? That seems like a waste of time, light, and ink. When even the well-intended can go wrong and the ill-intended cannot be convinced, why do scholars, why do feminist activists, keep at it? What can we learn from them about human rights? And what would it mean for these activists to be accountable in practice to their own theory of human rights?

As the research leave during which most of this book was drafted came to an end, Marie sent me her latest plan. Marie is trying to get her children out of Rwanda. She had two with Jean-Paul, her husband, three more, orphaned in Burundi, whom Jean-Paul and she adopted in 1992, and a sixth child whose parents were recently killed. Her country did not demilitarize after the Rwandan Liberation Front and paramilitaries ended the 1994 genocide. When her family returned from a refugee camp in Uganda, though he had not participated in the genocide, her husband was killed by paramilitaries in post-genocide violence.