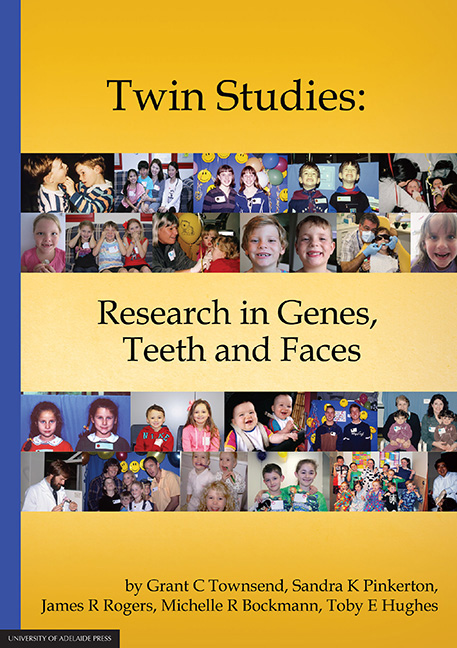 There is an interesting lineage of researchers who influenced Grant Townsend and contributed directly or indirectly to the establishment of the three major studies of Australian twins and their families at the Adelaide Dental School. These studies commenced in 1983 and still continue today.

Townsend studied the subject ‘Genetics and Human Variation IH’ presented by Professor John Henry Bennett from the Department of Genetics at the University of Adelaide in 1973. This was part of his Honours year, referred to as a BScDent (Hons) degree. This subject included a practical component which involved Nick Martin as a tutor in the laboratory. Another member of the staff in the Department of Genetics at that time was Dr George Mayo, who was more than happy to answer questions about genetic aspects of dentistry and to help subsequently with any issues that arose in writing up papers from Townsend's PhD (Figure 4.1). Nick Martin has continued to be a magnificent supporter of the Adelaide Dental School twin studies over the past thirty-five years, always prepared to provide advice and to encourage and challenge us to ‘push back the frontiers of knowledge’.

JH Bennett subsequently put together the combined works of Sir Ronald Fisher, who spent time in Adelaide during the 1960s. Fisher was a mentor to Kenneth Mather and John Jinks, who supervised Lindon Eaves's PhD; and Eaves, in turn, was a supervisor of Nick Martin's PhD.

After being appointed to the academic staff of the Adelaide Dental School in 1977, Townsend and his PhD supervisor, Professor Tasman Brown, published some papers presenting the main findings of the thesis entitled Tooth size variability in Australian Aboriginals: a descriptive and genetic study (Townsend and Brown, 1978a,b; Townsend, 1978; Brown and Townsend, 1979; Townsend and Brown, 1979a,b). Townsend was well aware of the ongoing importance of the records collected in the 1950s and 1960s during the longitudinal growth study of Aboriginal Australians living at Yuendumu in the Northern Territory (Brown et al., 2011). He was keen to establish another ongoing study that would enable questions about the genetic basis of dental development and morphology to be further addressed, and he realised the potential of studying twins.