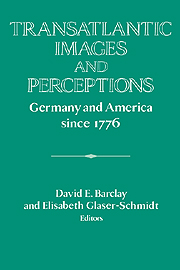 On May 7, 1805, Pastor Johann Georg Schafer, Lutheran pastor of Bieber, Hanau, wrote to Johann Georg Knapp of the Francke Foundations in Halle/Saale. Schafer, whose nephew Johann Edward Schafer similarly labored as pastor in Germantown, Pennsylvania, inquired about a book order the Hanauer had placed with Halle's book dealer in Frankfurt. At the end of the letter, however, Schafer could not let the opportunity pass to express his hope and that of fellow pastors that Knapp and the Halle fathers would reject “the spirit of the present times” that would “transform the Religion of Jesus into a mere natural faith. We beg you to remain faithful to the Truth and further to defend the same, which is in fact the duty of theologians.”

This letter, replete with multiple ironies, provides a useful text on which to suggest a reconsideration of the image of America shared by Germans from the outbreak of the American Revolution in 1776 to the abolition of the Holy Roman Empire in 1806. Because of the collapse of the religious networks that had long supplied some of the most important impressions Germans received of the New World, a more ambiguous view of religious freedom in America and its possible implications developed, especially after 1789. This theme is explored in the first part of the chapter. The second part argues that a rather muddled view of the American constitutional system after 1789 - both at the state and the federal levels - contributed to the confused picture of American freedom available to Germans in the Holy Roman Empire. The continuing tension between European Pietism and the late Enlightenment, and especially German-Americans’ own difficult relationship to these two movements, was also responsible for a shift in German perceptions of America by 1806.