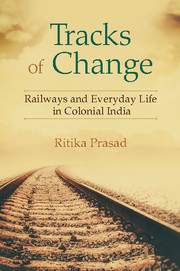 On 18 June 1920, cultivators in the Chai and Fakria areas of Bhagalpur congregated in vast numbers at Jhanjhara. Aggrieved and desperate, they stressed how in the last few years the high and poorly drained embankments of the Bengal and North-Western Railway had converted the regular and seasonable floods that occurred in the area into catastrophic ones. In 1917, the Ganges flood had breached the railway line at Mansi and Mahadeopur Ghat stations and left several villages submerged in six to nine feet of water. As a result, ‘hundreds of lives’ were lost, cattle died, and property was destroyed. Despite repeated appeals, little had been done to increase the inadequate waterways provided in railway embankments.

Roughly at the same time but hundreds of miles west, a shopkeeper in Gujranwala was hoping that railway timetables would help alibi him against charges of treason. Under section 121 of the Indian Penal Code, a martial law tribunal had accused Jagannath of fomenting agitation and inciting violence in the town between 12 and 14 April 1919. In his defence, Jagannath pointed out that it was impossible for him to have committed the crimes that he was being accused of for he had left Gujranwala on 12 April by the 5 p.m. train en route to Kathiawar. Further, railway timetables unequivocally proved that he could not have been physically present in Gujranwala after 6 p.m. on 13 April. The foujdar of Dhoraji could testify to his being present there on 16 April and even the fastest train from Delhi took 44 hours to reach Dhoraji.

At first glance, much distinguishes these two accounts from each other. One details the distress engendered by unseasonable flooding in Bhagalpur while the other recounts the legal travails of a shopkeeper from Gujranwala. Yet these two experiences are, in fact, part of the same historical story: one that explores how railway travel, technology, and infrastructure became palpably present in the everyday lives of Indians.