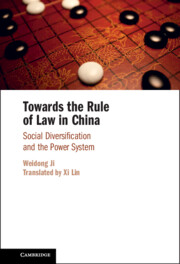 In an economy where the market is allowed free rein, there can easily emerge the so-called prisoners’ dilemma in game theory, a propensity toward “free-riding,” “the tragedy of the commons,” or ambiguous standards of utility calculation. Finally, it may result in a failure to adopt a Nash equilibrium to advance mutual interests. It may also result in market failure. From this it can be seen that a stable market economy depends on certain nonmarket institutions as its premise. It needs a rule of rules. Investors, traders, laborers, and consumers – be it individuals, groups, or enterprises, no matter how different their interest claims are – only a lucid knowledge of the rules of conduct, as well as of the consequences of violating these rules, can help them to make rational plans and decisions. Nevertheless, the rule of rules in the market cannot take form out of certain traditional practices. For instance, the market might serve as a place for execution, where “executing criminal offenders at busy marketplaces [aims] to arouse public sentiments of abhorrence” (in the Book of Rites, see Chen 2004, p.91); as the place to gather public opinions, where ancient kings “attended to public discussions” (from Intrigues of the Warring States, in Wang and Meng 1993, p.756); or simply to demonstrate the authority of the emperor, for “all culprits will be exempted when the state emperor passes the market” (from the Book of Zhou Rites, in Lin 1985, p.146). More important than these traditional practices is a universal application of rules to all equally, where the government should not privilege one group against another, or arrogate a power above the law. This is to shape a state that approximates free and fair competition with rules and regulation, without which the relations between and among groups can be difficult to coordinate and for a competition-based, efficient mechanism to function properly. For this very reason, all states where a modern market economy functions well have chosen the modern principle of the rule of law as their foundation.