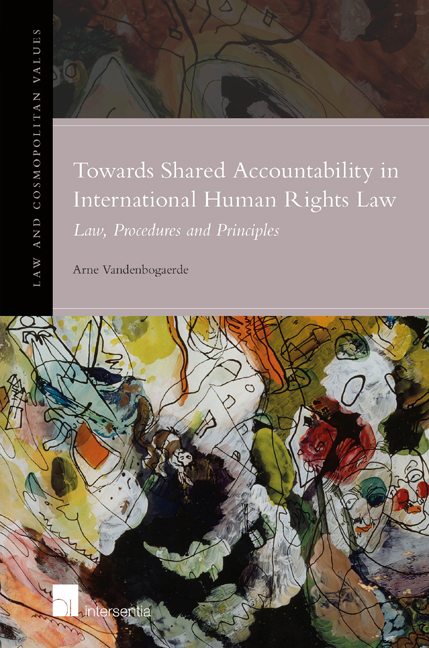 Towards Shared Accountability in International Human Rights Law
Law, Procedures and Principles
Buy print or eBook[Opens in a new window]

The most used legal dimension of human rights accountability - in the sense of invoking and determining responsibility - has materialized in the international and regional accountability system through two accountability procedures or mechanisms:

In line with our definition of accountability these procedures entail a relationship between an accountholder and a power wielder where the latter is under the obligation to provide information about its conduct and may face consequences if it has failed to fulfil its obligations. In other words, they both present a legitimate accountability procedure.

A second common feature is that the decisions - or ‘views’ as they are called - of the CESCR, CRC, IACHR and African Commission have a non-legally binding character as a quasi-judicial body issues them. Quasi-judicial refers to ‘an organ that is not judicial and is not presided over by judges who render judgement, but is a forum/body that is presided over by members with other titles […], who examine cases of alleged human rights violations and apply the international legal norms as standards with which to judge a State's action'. In contrast, the African Court on Human and Peoples’ Rights (ACtHR), the European Court of Human Rights (ECtHR) and the Inter-American Court of Human Rights (IACtHR) are judicial bodies and thus their decisions are legally binding.

Nevertheless, the quasi-judicial bodies strive to function as a genuine human rights court when deciding cases. In other words, they apply strict procedural and substantive rules and thus provide a formal accountability process for victims of human rights violations. The rules and their interpretation determine whether or not complaints in relation to the violation of extraterritorial obligations will be dealt with. In the sections below we will focus on issues of standing, material scope and jurisdiction in the international and regional human rights mechanisms that can deal with ESC rights.