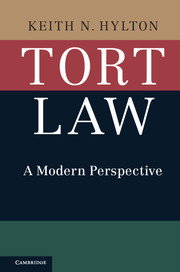 The law on intentional torts is a broad area of tort law, governing physical assaults, takings of property, and related direct invasions of rights. The question of how much care an individual should take to avoid an accidental injury to someone else, treated abstractly in the second chapter, will have less relevance in this chapter. Intentional torts result from conduct that clearly will impose a loss on someone. Tort law regulates intentional conduct by determining how those losses ultimately will be allocated.

When a man goes upon his neighbor's land, thinking it his own, he intends the very act or consequence complained of. He means to intermeddle with a certain thing in a certain way, and it is just that intended intermeddling for which he is sued.…One who diminishes the value of property by intentional damage knows it belongs to somebody. If he thinks it belongs to himself, he expects whatever harm he may do to come out of his own pocket. It would be odd if he were to get rid of the burden by discovering that it belonged to his neighbor.

The foregoing passage from Holmes pretty well sums up the function of liability for intentional torts. Put simply, liability serves an internalization function, by shifting the losses an actor imposes on others through intentional conduct back to the actor. For example, if A throws a rock through B's window, the internalization principle requires A to pay for the loss he imposed on B.

Why internalize losses caused by intentional conduct? Because, as Holmes suggested, if you take an action that directly imposes a loss, such as breaking a window, that loss will have to be borne by someone. Internalizing the loss compels the actor to take the loss into account in deciding which action to take. Thus, internalization induces the actor who handles someone else's property to follow the same decision process he would follow when handling his own property, to treat the losses he imposes on others as if they were his own.

What is desirable about making actors treat the losses they impose on others as their own? Return to the window-breaking example. Why would a person choose to break his own window? There are many reasons.