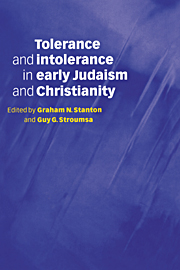 Whereas some writers, following the example of Gibbon, would view monotheism as a system which of itself generates intolerance, others would consider intolerance to be the very measure of faith. Monotheism cannot, in fact, be the cause of division between Jews and Christians since, as Tertullian points out, both groups share the same conception of the divine even though their manner of worship differs (Apol. 21.2–3). And yet, the question which is at the heart of this book is a real one: can there or should there be limits to tolerance between the two faiths? Indeed, are there already existing limits? The question can be expressed in other ways: how can the two faiths maintain their distinctiveness and coexist? And how can self-identity be preserved when, as several contributors to this volume suggest, intolerance is an indication of a feeling of uncertainty and ‘a proof of weakness’? How can the transition be made from principle de iure to practice de facto when the distance from the law to the application of the law is so often a long way to travel? Is it a question of a majority-minority relationship? What justifications for intolerance can be offered, from both the Jewish and the Christian sides, if ‘tolerance and acceptance of one's neighbour, especially if he is a monotheist, are fundamental religious principles of the Synagogue’ or if, as Y. Leibovitz has underlined, ‘the Torah makes no provision for compelling by force’? What is to be made of the interpretations given within the Christian tradition of the well-known compelle intrare, ‘compel people to come in’ (Luke 14:23), in order to justify religious coercion?